Remy (Michael Rapaport), now a Neo-Nazi skinhead, gets convinced by his fellow roommates to kill someone to prove his worth.  He does so at a Peace Festival celebrated on campus.  He goes to one of the buildings’ rooftop, and opens fire, wounding Deja (Tyra Banks) and another student.  Deja dies from her wound, screaming “WHY??!!”.  Malik (Omar Epps) overcome by shock, anguish and rage, chases Remy to kill him.  They meet in a fierceful confrontation; and just when Malik is about to strangle him, Security appears and violently spread them apart.

Overcome by guilt and remorse, Remy commits suicide by shooting himself with his gun.

Time passes.  Malik has the chance to have a word with Kristen (Kristy Swanson), whom he had seen around several times before, including at Dr. Phipps’s (Laurence Fishburne’s) class, but had never had the chance to talk to.  Also, he proves himself worthy to Dr. Phipps by having succesfully passed his course, and demonstrating that the previous tragedy wouldn’t prevent him from going on and keep studying.  And, among the graduates of that year, we see Fudge (Ice Cube). 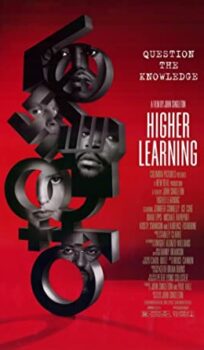