Pooper:
480 year-old Immortal Connor Macleod (Christopher Lambert) beheads the Kurgen (Clancy Brown) at Silvercup Studios in Queens, New York and wins The Prize. The Prize is omniscient knowledge, but he becomes mortal, which allows him to wed Brenda (Roxanne Hart).

Long Version:
There can be only ONE!

The film opens in New York City at a wrestling match. Two men, ignoring the fans and the action on the mat, head downstairs to the parking garage. They draw swords and fight. They clearly have enhanced abilities, with their swords cutting through concrete and able to leap long distances. Finally, Russell Nash (Christopher Lambert) beheads his foe. Explosions and electricity erupt and Nash is super-charged. He is arrested when he attempts to flee, but is soon released due to a lack of evidence. Detective Brenda Wyatt (Roxanne Hart) believes Nash is involved, but can’t prove it.

Through flashbacks, we learn that Nash is actually Connor McLeod, a highlander from old Scotland. He is savagely attacked by a barbarian during a battle named the Kurgan (Clancy Brown) but despite being mortally wounded, he does not die. His family and friends run him out of town, believing McLeod to have made a deal with Satan to return to life.

McLeod is soon approached by a centuries-old man named Juan Sanchez Villa-Lobos Ramirez (Sean Connery). Ramirez explains that McLeod is an immortal. After McLeod’s powers manifest (in a process known as the “Quickening”) Ramirez trains McLeod to utilize his supernatural powers and to become an expert swordsman. He explains that an immortal may only be killed by being beheaded by another immortal (and it appears each time an immortal kills another, their own powers increase). The immortals cannot bear children and they are all fated to fight until only one remains, who will gain a “prize.” Ramirez, McLeod and McLeod’s wife all live happily in a small fort. While McLeod is away, the Kurgan appears and fights Ramirez (in a battle so brutal the entire fort is destroyed). Though Ramirez manages to slit the Kurgan’s throat (a scar that never heals), the Kurgan eventually beheads Ramirez (who manages to save McLeod’s wife’s life before being killed). McLeod lives with his wife through her lifetime and then heads out into the world. We are shown scenes of him fighting the Nazis (and rescuing a little girl from them who later grows up to become his assistant) and causing hijinks in Revolutionary-era America.

In modern day, the Kurgan reappears and begins hunting down McLeod (and killing other immortals). Meanwhile, McLeod and Brenda become friends and lovers. McLeod ultimately reveals his past to Brenda (who happened to be a history and sword expert and generally discovered on her own that McLeod was immortal). Brenda is eventually kidnapped by the Kurgan who uses her to lure McLeod to him. The Kurgan claims they are the last two immortals.

McLeod and Kurgan fight on the rooftops of the city, causing an insane amount of damage. Kurgan gets the upper-hand until Brenda distracts him, giving McLeod the opening needed to behead Kurgan. The biggest explosion yet occurs and McLeod is possessed with ultimate power. Brenda manages to talk McLeod down from his power-trip and McLeod reveals that he is no longer immortal (and no longer infertile). The film ends with McLeod and Brenda living happily together in Scotland with McLeod reminiscing about his greatest friend, Ramirez.

Given the multiple sequels featuring Connor McLeod and a spin-off TV show following the journey of another immortal who eventually fights McLeod in one of the films, the ending where McLeod is no longer immortal is probably retconned, ignored, or undone. 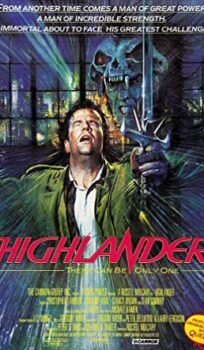