Long Ending:
300 years prior, teenage sisters Winifred, Mary, and Sarah Sanderson live as orphans in Salem, Massachusetts. When Winifred defies Reverend Traske’s (Tony Hale) demand that she marry one of the young townsfolk, he threatens to break their family apart. The girls cause a distraction and flee to the Forbidden Forest, where they meet a powerful witch that can transform into a bird (cameo by Hannah Waddingham). Although the witch initially tries to devour the girls’ souls, she realizes they have the potential to be powerful witches. The witch spares the Sandersons’ lives and gives them her magic, sentient spellbook (the “Book”). The witch warns them that while Book contains a spell to transform them into an all-powerful witch, they must promise never to perform it. The girls take Book, embrace being witches, and wreak havoc on Salem until they are killed (as shown in the first film).

In the present day, it is Halloween night, and teenage friends Becca (Whitney Peak) and Izzy (Belissa Escobedo) plan to celebrate Becca’s birthday with their tradition of reciting incantations in the Forbidden Forest. They used to do this with their friend Cassie (Lilia Buckingham) as well, but since Cassie started dating and becoming popular, they don’t hang out anymore. Cassie and her father the Mayor (Tony Hale) are descendants of Reverend Traske. The girls stop by the local magic shop owned by a man named Gilbert (Sam Richardson), who gifts Becca a special candle for her birthday.

Becca and Izzy light the candle as the moon rises, surprised to discover it has a black flame. This candle is the main part of a ritual that resurrects the Sanderson sisters from the dead – Winifred (Bette Middler), Mary (Kathy Najimy), and Sarah (Sarah Jessica Parker). The witches immediately try to eat the souls of Becca and Izzy, as doing so is the only way they can stay alive past morning when the black flame candle burns out. But since their legend has grown since the events of the first film (indeed, with many people even dressing up as the Sanderson sisters for Halloween), the girls are able to distract the witches and make several attempts to flee. They are eventually locked in Gilbert’s basement by the witches. It turns out that as a child, Gilbert saw the Sanderson sisters when they were resurrected in the first film and fell in love with magic. Thinking the witches were just misunderstood, had worked to bring them back and even recovered Book. Gilbert used Book to find a way to make a new Black Flame candle and tricked Becca and Izzy into resurrecting them. The witches surprise Gilbert with their meanness and put a spell on him to aid their cause or die.

Winifred eventually decides that rather than devouring souls to stay alive, they will perform the forbidden spell to make them all-powerful. The Book tries to stop them, but Winifred forces it to divulge the spell. Winifred then skips the warning at the beginning of the spell and goes right to the ingredients. The sisters task Gilbert to get the ingredients for the potion, including recovering the head of Winifred’s “lover” – the zombie Billy Butcherson (Doug Jones). Gilbert finds Billy still conscious as nobody put him “back to sleep” after the first film. Billy objects to being called Winifred’s lover, as they only ever kissed once. Gilbert tricks Billy into helping him (claiming he’s working on a spell to stop the sisters). Meanwhile, the Sandersons go to try and kidnap Mayor Traske as they need the blood of their enemy to make the spell work, and he is a descendant of their old nemesis Reverend Traske. Becca and Izzy meanwhile manage to perform an incantation that frees them from the basement, and they run off to save Mayor Traske.

The girls make it to Cassie’s house, convince her the witches are real (and after her dad), and even manage to save the Mayor by trapping the witches in a circle of salt (salt cancels out evil powers). The Sandersons eventually manage to escape, and they abduct Cassie instead. The witches meet Gilbert (where he betrays Billy by taking his head despite the pair developing a friendship) and get the rest of the ingredients from him. Becca and Izzy pursue the Sandersons and manage to free Cassie (but not before some of her blood was collected), and Becca even manages to perform magic like Winifred. Though the girls temporarily disrupt the spell, and Book joins Becca’s side in trying to stop the spell, the Sandersons ultimately manage to complete it. Mary and Sarah get powers similar to Winifred, and none of the witches die when the black flame candle burns out.

As Winifred gloats, Becca reads the warning placed before the spell. She informs Winifred that for the spell to work, the spell caster must sacrifice the thing they love the most. To Winifred’s horror, Sarah and Mary (the things she loved most) are destroyed and sent to the afterlife. A chastened Winifred begs Book, Becca, and her friends to fix what she’s done. Book opens up to a spell, and Becca, Cassie and Izzy perform it. The spell sends Winifred into the afterlife to be with Sarah and Mary. Gilbert returns shortly thereafter and apologizes for what he’d done. Billy and Gilbert also make up (with Gilbert promising to tell everyone Billy was not Winifred’s lover) as the Sanderson spell reanimating Billy dissipates, and the zombie can rest in peace. Becca, Izzy, and Cassie are now friends again and walk off with Book…. as the old witch from 300 years ago flies by in bird form.

After the credits, we see that Gilbert had made a second backup black flame candle… opening the door for the Sanderson sisters to potentially return. 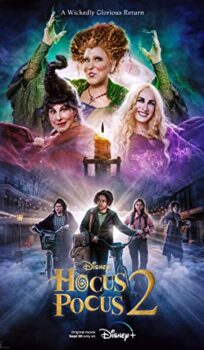