This Abbott and Costello film has the comic duo playing Chuck and Ferdie. They eke out a living as gas station attendants, only to somehow end up inheriting a rundown tavern/inn owned by a gangster who was gunned down by the police.

Soon the inn shows signs of being haunted by Moose, the gunned-down gangster. The ghost turns out to be one of Moose’s gang members who tried to scare away the new owners and the guests while looking for a hidden cache of money somewhere in the tavern. When alive, Moose used to say that he always kept his money in his head. Everyone assumed it was a figure of speech, but then Ferdie puts his hand inside the mouth of a stuffed moose head which is hanging on the wall in the tavern and starts pulling out the money.

With the “ghost” captured and the money found, Chuck and Ferdie renovate the place and make it into a swinging nightclub and resort. 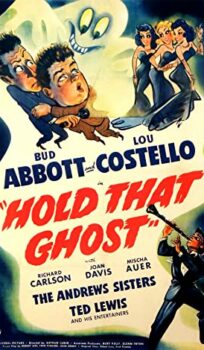