Once again, Kevin (Macaulay Culkin) sets in motion a plan against Harry (Joe Pesci) and Marv (Daniel Stern), this time around to prevent them from robbing Duncan’s Toy Chest.  Like in the previous movie, he tackles on them with a pack of booby traps.  But after he calls 911 from a payphone, while crossing the street, he slips on an icy surface and falls to the ground, hitting his head; then, the burglars catch him and haul him off to the park, to get rid of him.

Suddenly, the Pigeon Lady (Brenda Fricker) comes behind them and sprinkles them full of bird seeds; the pigeons come upon them and attack them.  Kevin thanks the Lady, lights up a pack of roman candles and runs away, safe.  The police, guided by the fireworks, arrive and arrest the guys.  Marv claims this time around that they are now “The Sticky Bandits”.

Kate (Catherine O’Hara) finds Kevin by the Christmas Tree in Rockefeller Center, and they both meet and embrace, and join the rest of the family, who are all staying at the Plaza Hotel.  The next morning they find a Christmas tree full of presents, courtesy of Mr. Duncan (Eddie Bracken).  Kevin, while everyone is opening gifts, sneaks off and meets the Pigeon Lady to give her one of the turtledoves he received earlier from Mr. Duncan.

At the same time, the room service bill is brought to the suite; Buzz (Devin Ratray) receives it -and sees Kevin had spent $967.00 DOLLARS ON ROOM SERVICE!!-, and turns it over to Peter (John Heard), their dad, who is heard yelling at Kevin, while he runs away, and the movie ends. 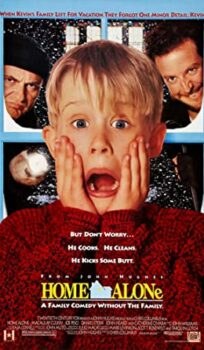