*A Home Alone film in name only.

SHORT VERSION: Molly (Barbara Babcock) is Marv (French Stewart) and Vera’s (Missi Pyle) insider in the kidnapping plot, not Prescott (Erick Avari), and she is also Marv’s mother. Kevin (Mike Weinberg) uses his booby traps to knock out Marv and Vera, and Prescott knocks out Molly. Kevin’s mother, father, and siblings then show up, and his father realizes that Kevin was telling the truth about the kidnappers. The cops take the crooks to jail just as Natalie (Joanna Going) shows up with the royal family. Prescott tells Natalie that he’s quitting, and Kevin’s father also tells her that he doesn’t think she is the right woman for him and that he misses being with his family, and then he reconciles with Kevin’s mother. Kevin offers the grateful royals an invitation to come spend Christmas with him and his family, and they accept.

LONG VERSION: Kevin finds out that Marv and Vera are planning to kidnap the crown prince (Craig Geldenhuys) on Christmas shortly after he arrives at the mansion, and he comes to believe that the butler Prescott is their insider who will deactivate the security system so they can get away with him. He prepares for the trio the night before the royal family’s arrival by setting up booby traps and changing and adding commands to his mansion remote controller.

The next morning, after his father Peter (Jason Beghe) and Natalie leave to pick up the royal family at the airport, Kevin tricks Prescott into going into the wine cellar and locks him in. He then runs into the maid Molly, and after telling her of Marv and Vera’s plan and how he locked Prescott in the cellar, she reveals that SHE is actually the insider, and when Marv and Vera then come in, he finds out that she is also Marv’s mother. She then locks him up with Prescott.

Kevin uses Prescott’s cell phone to call his mother Kate (Clare Carey), but the battery dies before he can tell her about his predicament. She calls the mansion’s phone, and Molly answers, who tells her that Kevin is with Peter and Natalie. She then calls Peter, but he tells her that Kevin is at the mansion, and she informs him that she was just told that Kevin was with him. Through all of this, Kate and Peter suspect that something fishy is going on at the mansion, so Kate heads there with Buzz (Gideon Jacobs) and Megan (Chelsea Russo) while Peter takes a taxi from the airport, leaving Natalie to pick up the royal family.

Prescott eventually remembers that there is a dumbwaiter in the cellar, and as he and Kevin uncover it from behind some boxes, Kevin apologizes to him for misjudging him (and vice-versa). He also tells Prescott that he should not continue to work for the slave-driving Natalie out of fear that he won’t be able to find another job, because life is too short. He then heads back up into the house in the dumbwaiter.

Using his booby traps and his customized remote, he traps Molly in the elevator and then knocks out Marv and Vera. Molly manages to get out and grab hold of Kevin, but before she can strike him, Prescott – who had gotten back upstairs by climbing up the dumbwaiter shaft – appears and knocks her out. After he goes to call the police, Peter, Kate, Buzz, and Megan arrive, and after Peter sees Marv, Vera, and Molly, he realizes that Kevin wasn’t lying about the kidnapping plot. By this point, Marv and Vera have come to, and they try to make a run for it, but as they reach the back door, Buzz and Megan trip them up and pin them down.

The cops arrive and cuff Marv, Vera, and Molly, and just as they are being taken away, Natalie shows up with the royal family. After the cops and Peter inform her about the kidnapping plot, Prescott – taking Kevin’s earlier advice to heart – declares to her that he is resigning. Then, Peter tells Natalie that, with her, he believes that he mistook infatuation and excitement for love, and he feels that her lifestyle just isn’t for him. The whole time he was at her mansion, all he did was miss his family, and he loved Kate and the kids and wanted to be with them. He and Kate then hug and affirm their love for each other. The queen (Lisa King) asks Kevin how her family could repay him for foiling the kidnapping, so he asks if they would like to spend Christmas at his house with him and his family, and they accept.

Thanks Tornado Dragon,
who also adds… “This movie made Home Alone 3 look like a contender for the Academy Award for Best Picture” 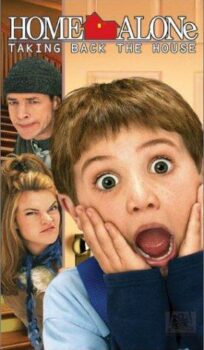