The Boov, a cowardly race of aliens, are constantly fleeing across the universe, trying to get away from the Gorg, another alien race they believe want to destroy them. The Boov leader, Captain Smek (Steve Martin), thinks that Earth would be a perfect planet for the Boov to hide on, so the Boov conquer the Earth and relocate all the humans to a small patch of Australia.

A hapless Boov named Oh (Jim Parsons) tries to host a housewarming party, and accidentally sends out an e-mail invitation to EVERYONE in the galaxy, including the Gorg! His invitation included directions to Earth, which means the Gorg will find out where the Boov are hiding. Boov flees in terror, while the Boov’s leading intellectuals are called together to figure out how to stop the Gorg from reaching Earth.

The fugitive Oh meets a human girl named Tip (Rihanna) who had avoided being relocated, and is now trying to find her mother. Oh transforms TIp’s car into a flying machine, and they head off together to the Boov headquaretrs in Paris, where they can find out where Tip’s mother is. During their travels together, Oh discovers that humans are not the simple, stupid creatures Smek had said they were, and that the Boov were wrong to take over the Earth.

The Boov intellectuals are trying to figure out Oh’ s computer password, so they can retract the party invitation. They can’t figure it out, but when Oh reaches Paris, he enters his long, complicated password on the main computer and withdraws the party invite.

But even though the invitation was withdrawn, the Gorg ship still comes to Earth, and looks ready to destroy the planet. Oh tries to help Tip escape from Earth, but she refuses to leave as long as her mother is on Earth. At long last, Oh figures out that the Gorg are not evil- they have been pursuing thje Boov because Smek had stolen a rock from them, a rock that was precious to the Gorg. Oh takes the rock and runs toward the Gorg vessel. The Gorg vessel stops (just barely in time), and the Gorg comes out of the vessel to take the rock.

As it turns out, there is no Gorg army- just one remaining Gorg, who is the only surviving member of his race. While this Gorg looks huge and menacing, he’s actually a tiny, friendly creature who looks like a starfish! It was only the large robotic suit he lived inside that made him look scary. The rock he was after contains millions of Gorg embryos which will lead to the rebirth of his people.

The Boov turn against Smek and make Oh their leader. Under Oh’s leadership, humans and Boov live together on Earth in peace, and the Gorg race is saved. 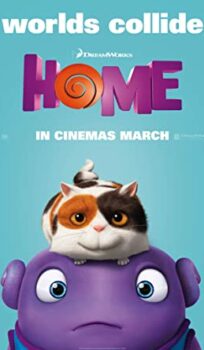