During the journey, the dogcatchers capture Chance, but Shadow, Sassy, and Riley and his gang save him and send the dogcatchers packing. Afterwards, Delilah ends things with Chance, since he was a pet and she was a stray. Heartbroken, Chance forsakes her, Shadow, and Sassy, and disappears. Delilah soon comes to regret what she said.

The next day, Riley brings Shadow and Sassy to an area outside the Golden Gate Bridge. They bid each other farewell, and Riley promises Shadow that he’ll remember what he said about how not all humans are bad. As the duo is going through a construction site, Ashcan and Pete confront them again. Chance – having followed them since they left Riley’s – comes to their aid, and he incapacitates Ashcan and Pete.

The trio crosses the Golden Gate Bridge, but as they near home, Chance stops in the road and looks longingly out at San Francisco, thinking of Delilah. However, he doesn’t hear the sound of a truck coming towards him, which skids to a stop and seems like it might have hit him. The Seavers, who were behind the truck, are forced to stop as well, and they see Shadow and Sassy and reunite with them. The trucker informs Bob (Robert Hays) that he had to stop to avoid hitting a dog, and Bob – realizing it’s Chance – tells Jamie (Kevin Chevalia) this. Jamie panics, but thankfully, he finds Chance alive and unharmed beneath the truck, and they have a joyful reunion.

The next day, Delilah shows up at the house, and she tells Chance she loves him, which he joyously returns. Chance “introduces” her to the family, and after they see how happy he is now that she’s here, they decide – much to Chance’s great elation – to take her in. 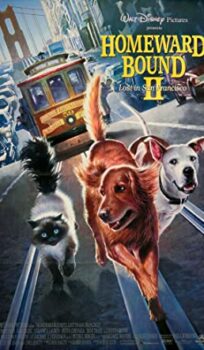