The homicidal maniac “Emily” doesn’t exist. She is actually Warren Webster, in disguise. Warren created the persona of Emily, and committed the murders as Emily, so that after killing Alfred Adrims (James Westerfield), Helga Swenson (Eugenie Leontovich) and Miriam Webster (Patricia Breslin), “Emily” could vanish into thin air, and Warren could inherit the Webster estate. After eliminating the first two, Warren reveals his dual identity to Miriam, and is about to kill her when Dr. Jonas (Alan Bunce) interrupts. Miriam is able to turn the tables and shoot Warren dead.

The reason that Warren couldn’t just wait until his 21st birthday, and inherit the estate under the normal terms of the will? Well, the fact is that “Warren” is actually a girl, and has been masquerading as male his whole life (Warren and Emily are both played by Joan Marshall). Adrims and Helga are the only ones who know the truth, and initiated the deception at Warren’s birth just to get a share of the inheritance, which is bequeathed to a son. Approaching 21, Warren didn’t want to share, and if his secret were revealed, the estate would go to Miriam, Warren’s half-sister from their father’s prior marriage.

Note: Yes, there really is a character named “Miriam Webster” in this movie. And the huge flaw in the plot is that Warren could have just stopped killing and made Emily vanish after beheading Helga. There was no REASON to kill Miriam, because Warren could have sat tight and gained the inheritance while the police searched in vain for Emily. 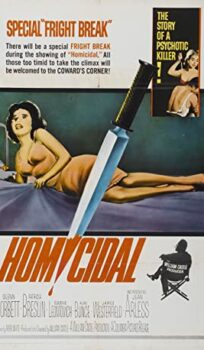