Diane (Marcia Strassman) realizes that in order to get Adam (Joshua & Daniel Shalikar) to keep still for twelve seconds so Wayne (Rick Moranis) could use the shrink ray on him and return him to his normal size, Wayne will have to make her bigger with the ray. Adam would never register her at her current size because he “knows” that his mom is supposed to be bigger than him. She is enlarged just as Hendrickson (John Shea) and some military personnel he hired come in a helicopter with a large tranquilizer gun, intending to sedate Adam.

As Hendrickson is shooting at Adam, Diane grabs the helicopter, tells the pilot to back off, and then brings it down to the ground. She then embraces her son, and Wayne and his boss Sterling (Lloyd Bridges) turn the ray’s power up to its maximum limit and restore Diane and Adam to their normal sizes. Hendrickson shows up soon after, and Diane punches him unconscious for trying to tranquilize her baby.

Wayne and Diane soon realize that Nick (Robert Oliveri) and Mandy (Keri Russell), who were in Adam’s overalls pocket, are now tiny since Adam is his normal size again. However, upon searching the pocket for them, they find a hole in the bottom of it, meaning that they were somewhere on the ground now. Nick and Mandy are then shown in the sports car they were shrunk in together with, and Mandy kisses Nick and gets comfortable with him just as Wayne finds them. Wayne decides to hold off on restoring them for a while to give Nick some alone time, and Adam is pleased to see that his favorite toy, Big Bunny, is still over 50 feet tall. 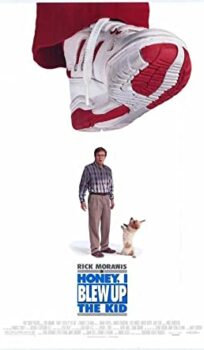