After enduring bees, a water sprinkler, a scorpion, and a lawnmower, Amy (Amy O’Neill), Nick (Robert Oliveri), Russ Jr. (Thomas Wilson Brown) and Ron (Jared Rushton) grab hold of Quark’s snout hairs when he is sniffing the grass near them, and Amy screams for him to bring them to Wayne (Rick Moranis). He immediately heads into the house.

Quark jumps onto the table to get Wayne’s attention, but when he barks, Nick falls off of his snout and into Wayne’s bowl of cereal. Quark puts the other kids on the table, and they run in Wayne’s direction screaming to get his attention before he accidentally eats his own son. Their cries don’t reach his ears, but just before he eats Nick, Quark bites his leg to stop him. He looks into the spoon and sees his son, and Nick then directs his attention to the others nearby.

Wayne and Diane (Marcia Strassman) get Russ and Ron’s parents over, and they go into the attic with the kids. There, the kids communicate to their parents that Ron’s baseball went through the window and activated the shrink ray, and Wayne realizes that the baseball had acted as a filter for the machine’s energy, producing just enough to shrink them without blowing them up like it did his other test subjects. He puts the ball back in the machine, and after successfully shrinking and regrowing Russ Sr. (Matt Frewer) as a test, he restores the kids back to their normal sizes.

The movie closes with the two families celebrating Thanksgiving together with an enlarged turkey and Quark eating an enlarged dog treat, thanks to the machine. 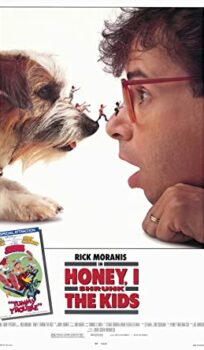