Wayne (Rick Moranis) figures out that if he, Gordon (Stuart Pankin), Diane (Eve Gordon) and Patti (Robin Bartlett) got to the stereo in the living room, he could re-wire it so they would be able to talk through the speakers, and therefore their kids will hear them and find them.

Wayne and Gordon head for the speakers while Diane and Patti head for the kitchen, since they had to find Mitch’s (Jake Richardson) medicine for his potassium deficiency in there and somehow get it to him. They find it just as Mitch and Adam (Bug Hall) come in and start looking for it themselves, since Mitch was in bad shape. Mitch sees Diane and Patti, but then he faints. Adam and Jenny (Allison Mack) rush to his side, and even though they don’t find his medicine, Adam remembers that bananas have potassium, so they feed him one until he regains his composure.

A short time later, Wayne re-wires the speakers just as the party Jenny is holding is getting out of hand, and then Gordon speaks into one of them. He tells the partygoers that he is the voice of God, and he wants them all out of the house. The partygoers believe the voice and quickly leave. Gordon then directs the kids to him and Wayne, and tells them to get their mothers in the kitchen.

The kids bring them all up to the shrink ray, and with instructions dictated from Wayne, they turn the ray on and prepare it to return their parents to their normal sizes. They initially are hesitant to do so, thinking about all the freedom they could have, but they ultimately decide to “give them a second chance.” They turn the ray on, and the parents are restored to the way they were.

Wayne tells his son that he can attend baseball camp if he wants to, and also hands over the presidency of Szalinski Labs to Gordon, since he preferred to be an inventor. Diane tells him he can keep the Tiki Man statue and do what he wanted with it, so he later proceeds to make it enormous with the ray and put it in the back yard. 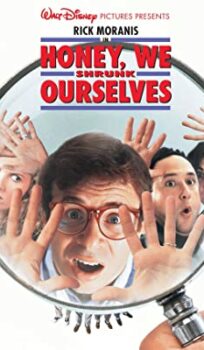