Peter Banning finally remembers his past life as Peter Pan and the reason he left Neverland: he fell for Wendy’s granddaughter Moira and became fascinated with the concept of love, marriage, and above all parenthood – which becomes his happy thought and enables him to fly again.

He leads the Lost Boys against Captain Hook’s forces and rescues both of his children; Hook manages to kill the interim Lost Boy leader Rufio in the melee. Hook claims that unless Peter kills him, he will never be able to live a normal life on Earth, but with Peter and all the kids distressed by Rufio’s death, he instead orders him to leave Neverland. Hook tries to slay Peter anyway, but Tinkerbell causes him to stab the clock that he had made out of the infamous crocodile that he had long ago killed and stuffed; it comes to life and finally dispatches of Hook.

Peter and his children return to Earth, greeting Moira, Wendy – and Tootles, a Lost Boy grown old to whom Peter returns his own happy thought (a sack of marbles); he goes flying out over London as the family watches. 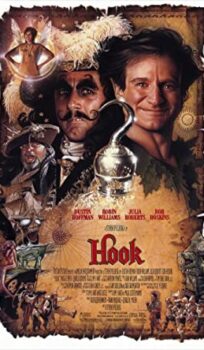