POOPER
Sonny and Ski successfully pull off the rocket car gag.  Roger apologizes to Sonny for the grief he has given him during the shoot, but Sonny responds by punching him in the face and walking off the set.

LONG VERSION:
Sonny Hooper (Burt Reynolds) is a veteran Hollywood stuntman working as the stunt coordinator, as well as Adam West’s (playing himself) stunt double, on an action movie called The Spy Who Laughed at Danger, directed by the egomaniacal Roger Deal (Robert Klein).  Sonny’s years as a stuntman, combined with his alcohol and painkiller use, is taking it’s toll on his health.  Sonny is currently living with his girlfriend Gwen (Sally Field), whose father Jocko (Brian Keith) is a retired stuntman.  In the movie business, stunts are referred to as “gags”.

During a break in the filming of the movie, Sonny agrees to appear in a charity stunt show.  There, he meets Delmore “Ski” Shidski (Jan-Michael Vincent), an up-and-coming stuntman who idolizes Sonny.  The duo bond during a barroom brawl scene, and Sonny hires Ski to work on the movie with him.  The two then begin a friendly rivalry by trying to outdo each other on increasingly dangerous gags, but after Sonny is hurt doing a freefall stunt, he goes to his doctor, who tells him that the next bad fall could leave him paralyzed or even dead.

As filming is near it’s conclusion, Roger announces to the crew that he didn’t like the ending that the writer came up with, so he is going to shoot a different one.  In his ending, a dramatic car chase will occur during an earthquake, complete with explosions, fires, and collapsing buildings.  Because of the extent of the resulting damage to the set, it can only be done in one take.  After the chase concludes, Sonny and Ski would drive the stunt vehicle to a gorge, but the bridge will have been blown up.  Sonny and Ski then suggest that they jump the gorge with a rocket-car.  Roger loves that idea, and he goes to the movie’s producer, Max Berns, to get what he needs to get the shot.  He tells him that this scene will put the movie over budget, but Roger demands that shot, and tells Max to cut anything else from the budget.  He is also told that if the gag goes wrong, Sonny and Ski could be killed.  Roger still doesn’t care; he just wants to get that shot.

Because of how dangerous this stunt will be, Sonny and Ski each demand an extra $50,000.  Roger agrees to pay their fee, but instead of cutting parts of the gag or other scenes to keep the movie under budget, he decides to fire most of the crew, something Sonny isn’t told about.  Sonny also doesn’t tell Gwen about the stunt, nor his medical situation, especially after Jocko suffers a minor stroke.  When Gwen does find out about both, she threatens to break up with Sonny if he goes through with the gag.  Sonny goes to Roger and tells him he’s backing out of the stunt, but when he learns about the crew being fired to pay for it, Sonny feels horrible about costing people their jobs and feels he’s obligated to do the gag.  He does tell Gwen that he will retire as a stuntman once the movie wraps.

On the day of the stunt, Roger is walking Sonny and Ski through the set and prepping them for what to expect.  Sonny, who is in charge of launching the rocket-car, is told that it must be charged to no less than 1500 psi in order to make it across the gorge.  With Gwen and a recovering Jocko watching, the cameras roll and the gag begins.  There are explosions everywhere, along with numerous car crashes and falling buildings and smokestacks, and everything is going perfectly.  However, the rocket suddenly begins losing pressure, and when it’s time to make the jump, it’s only charged to 1100 psi.  Ski, who is driving the car, wants to abort the jump, claiming no movie is worth his life.  But Sonny convinces him that it’s worth it, and they attempt the jump.  Despite the low pressure, they make it across the gorge.

The remaining crew go to the car and get Sonny and Ski out.  Both are shaken up, but they are going to be okay.  Gwen is relieved that Sonny is fine, and he reiterates to her that he is finished as a stuntman.  An ecstatic Roger shows up and congratulates Sonny and Ski for being able to do the gag in one take.  Roger then apologizes to Sonny for being a jerk throughout the shoot, and he knows that Sonny will accept it.  Instead, Sonny punches Roger in the face, and then he walks off the set, with Gwen, Jocko, and Ski following behind.  The movie then ends with a montage of all of the stunts performed in the movie. 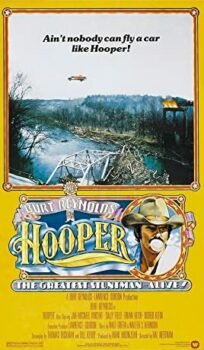