While rushing out of Harken’s house on their recon mission, one of the guys drops Pellitt’s (Colin Farrell) cell phone. Later on, Harken (Kevin Spacey) is going through his wife’s belongings looking for proof that she has been cheating and hears the phone’s ringtone. He goes to Pellitt’s house and shoots him dead when he answers the door. Nick (Jason Bateman) was outside observing the house and witnesses the entire thing.

The men try to tape a confession by Harken, but Kurt (Jason Sudeikis), was preoccupied sleeping with Harken’s wife to be there with the recorder.

The police think the men are guilty of murdering Pellitt or at least obstructing justice, and Harken thinks they are trying to blackmail him and decides to kill them. This leads to a high-speed chase and a showdown with the cops arriving to see Dale (Charlie Day) holding a gun and Harken shot in the leg. The navigation system in Kurt’s car had taped the entire conversation, however, as well as alerting the police, so in the nick of time, everyone was safe and Harken was arrested.

At the very end, Dale tricks Julia into acting out with a patient who turns out to be Kenny (P.J. Byrne) while Mr. Jones (Jamie Foxx) films it. He blackmails her into paying for an expensive honeymoon and decent working conditions and everyone lives happily ever after. 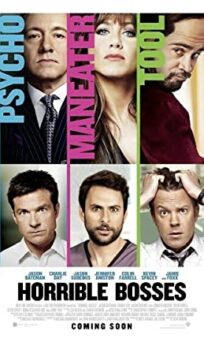