Unfortunately for all involved, the fossil actually hosts an incorporeal alien that kills people who look into the glowing red eyes of the body it currently inhabits by extracting their knowledge and memories, leaving the victim’s brain without convolutions and with eyes bleeding and completely white (no pupil, iris or blood vessels visible). The mayhem begins before the train leaves the station and continues throughout the trip with passengers dropping like flies until the fossil is shot by Inspector Mirov (Julio Pena). Unbeknownst to all but a Rasputin-like monk, Father Pujardov (Allberto de Mendoza), the alien transfers its life force into the inspector and so the bodies continue to pile up.

And as if things couldn’t get any worse, the train is overrun by Siberian cossacks led by Telly Savalas (!) (playing Captain Kazan). The alien is discovered when Saxton turns out the lights in a crowded railroad car and Mirov’s eyes glow red. Mirov is stabbed and shot by Kazan and runs from the car, but before Mirov dies, Father Pujardov begs the alien to become its host. Pujardov kills Captain Kazan and all of the cossacks, re-animates them as zombies under his control (!!) and the whole shambling mob heads for the caboose where the surviving passengers have fled.

The Russian authorities, having received word by radio of the plight of the train, order the tracks to be switched so the train will be sent over a cliff. The frantic passengers manage to detach the caboose in the nick of time and watch as the creature and all of the cossack-zombies are killed when the train crashes and explodes down in the deep ravine. 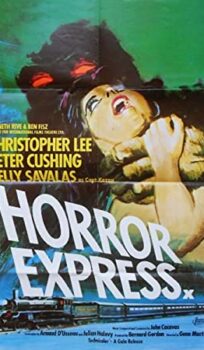