It is revealed that the hostel Paxton, Josh, and Oli are staying at is really a trap for tourists, who are kidnapped and sent to an abandoned warehouse, wherein people can pay a great deal of money to torture and kill them for personal enjoyment. This place is deemed the name ‘Elite Hunts’. Josh and Oli are tortured and killed, and Paxton gets a few of his fingers sawed off before he manages to kill his torturer and escape. With him he brings the Asian girl from the hostel, who had one of her eyes cut out and face severely burned with a blowtorch. While escaping in a car from on of the ‘Clients’, Paxton sees Natalya, Svetlana, and Alex talking in the street together, revealing that they are all part of the Elite Hunt regime. Paxton runs over them and kills them, and drives to the train station. At the train station, the Asian girl sees her horribly scarred face in a mirror and commits suicide by jumping in front of a moving train. Paxton gets on a train and leaves, brought to tears. While on the train, he sees the German surgeon, who tortured and killed Josh. At the next station, the surgeon goes into a bathroom, with Paxton following him. Paxton crudely cuts off several of his fingers before finally slitting his throat. He then gets back on a train, merely staring out the window. 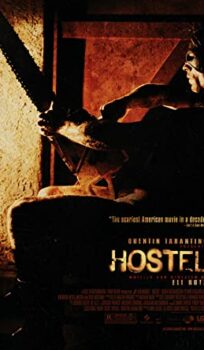