Jasper (Jim Dale) is a rough old cowboy, who owns the western town of Bloodshy.  He has a son Billy (also Jim Dale) who is a rough mean cowboy like him.  The other twin, Eli (Jim Dale, again) was raised differently by the mother and is a meek preacher.  Jasper fakes his death.  His will states that there will be a race between the two sons to decide who inherits the town.  It is a dangerous course by horse, canoe and train through the wild west.

The mayor (Darren McGavin) will inherit everything if both brothers die in the race.  Eli learns that the mayor has hired some thugs to kill both brothers during the race. Eli saves Billy’s life, and tells Billy of the mayor’s plan.  Both brothers team up together.  They enter town together to share the fortune.  The mayor tries to escape with the bags of gold, but is caught.  The sheriff (Don Knotts) becomes the new mayor.  And Eli gets the love of the school teacher (Karen Valentine). 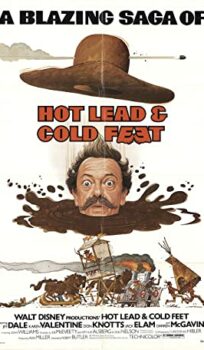