SHORT VERSION:
After Fred goes broke by investing all of his money into a bad company on Don’s advice (and from Sawyer scheming to keep Fred from unloading all of the stock before the company collapsed), he leaves town. His love interest Allison later finds out about Sawyer’s part in Fred going bankrupt and quits the brokerage firm in protest, and as she leaves, she encounters Don, and he reveals his ability to speak to her and tells her that they must find Fred. As they search, Fred tells Allison that he plans to enter an upcoming horse race and compete against one of Sawyer’s horses, and if he wins, she and Fred will get rich and he will get Sawyer’s new mare Satin Doll so he can produce an heir to the line of talking horses. They eventually find Fred and tell him of this plan, and he gets on board with it and later decides to be Don’s jockey.

Before the race, Sawyer and Fred make a bet where, if Sawyer’s horse Lord Kensington wins, Sawyer will get Don, but if Don wins, then Fred will get all of Sawyer’s horses, including Satin Doll. After Don fast-talks every horse minus Kensington out of the race, he defeats Kensington in a photo finish due to his buck teeth crossing the finish line first. Fred and Allison become wealthy and start a relationship, and Don gets Satin Doll and gets his teeth capped.

LONG VERSION:
One day, Fred (Bobcat Goldthwait) and Don (voiced by John Candy) come back to the farm Don was raised at with his family on a social call, and Fred discovers that his father is dying. Before his father expires, he tells Don to find a mate so he can produce an heir to keep the line of talking horses going. Don is initially not interested in doing it, but when Fred takes him to the Claremount Ridge riding club the next day to get him some food, he sees Sawyer’s (Dabney Coleman) wife’s new mare Satin Doll and develops an immediate attraction.

One day, after Fred comes home with groceries and finds that Don and a bunch of other animals had a party and trashed the place, Don digs into the oats Fred got for him and raves about how delicious they are. He suggests to Fred that he invest in the company that makes them, so Fred sells off his stocks and corners the market on the company. Sawyer and his lackey Osborne (Jim Metzler) see the rising stocks and decide to look for a way to invest in it as well, so Osborne contacts his pal Frank (Lonny Price) to discuss it. Frank informs him that he got insider information saying that the FDA is going to freeze all sales of the oats and investigate the company after animals from coast to coast started dropping like flies from consuming the stuff. Seeing their opening to bring down Fred, the two of them jam his phone while he is in the bathroom and then lock him in it so he can’t unload the doomed stock before the company collapses. Fred gets a call on the bathroom’s phone from Don, who tells him that the oats made him sick and that the company isn’t worth squat. Fred tries to get out of the bathroom and into his office in time, but fails and is rendered bankrupt.

Fred is next seen trying to hitch a ride out of town with him and Don on opposite sides of the road, and Fred tells Don that he needs some time alone, so Don gets a ride from a passing truck back into town and leaves Fred be. Back at the brokerage firm, Fred’s love interest Allison (Virginia Madsen) walks in on Osborne talking to someone over the phone about how he and Sawyer ruined Fred, so she confronts both him and Sawyer with what she knows and then quits in protest. When she leaves the building, she crosses paths with Don, and he reveals his ability to speak. They both then take off to find Fred, and along the way, Don tells her of how they must first restore Fred’s self-confidence, and then he will enter himself in an upcoming horse race – the El Segundo Stakes – against one of Sawyer’s horses, then beat Sawyer’s horse and earn a ton of money for her and Fred while he will get Satin Doll. They find Fred and Don fills him in on his plan, and explains that he will psyche out the other horses so he can get past them.

The day before the race, Sawyer and his crew come up to Fred, Allison, and Don and scoff at Don being entered into it. Sawyer and Fred then make a bet where, if Sawyer’s horse wins, Sawyer will get Don, but if Don wins, then Fred will get all of Sawyer’s horses, including Satin Doll. After not being able to find a suitable jockey to ride Don, Don starts spending the night sulking in his stable and having second thoughts about the race. Just then, his father – reincarnated as a horsefly – flies in to give him a pep talk, telling him that he can win if he uses his greatest asset: His mouth. The next day, Fred decides to be Don’s jockey.

As the race is underway, Don fast-talks just about every horse out of the race until it is just down to him and Sawyer’s horse, Lord Kensington, whom he is behind. Don tells Fred that he needs some motivation to get past Lord Kensington, and after running through some things that he loves and some things that are not really helpful, Fred gets him to really kick his speed into overdrive by telling him that, if he wins, he will pay to get his buck teeth capped. Don gets virtually neck-and-neck with Lord Kensington, and they apparently cross the finish line simultaneously, but when the judges check out the photo finish, they find that Don has won by virtue of his buck teeth having reached the finish line first.

Sawyer fires Osborne after he finds out that he bet on Don to win, Fred wins all of Sawyer’s horses and ensures that Don will have an heir produced with Satin Doll, and he and Allison start dating. Don is last shown at a dentist getting his teeth fixed. 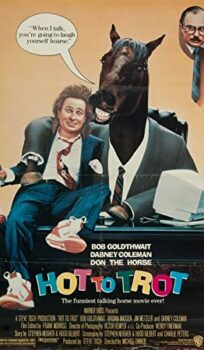