Adam (John Cusack) hooks up with April (Lizzy Caplan) the reporter in 1986 after Adam gets dumped by Jennie (Lyndsy Fonseca).  Somehow they are married with a funky huge house in 2010.

Lou (Rob Corddry) did try and kill himself at the beginning of the movie.  Lou stands up to the ski patrol guy, Blaine (Sebastian Stan) and gets the Russian energy drink back.  He doesn’t want to go back to 2010.  Adam will stay with Lou in 1986 if Lou isn’t going back.  Lou is happy that Adam is being a true friend and pushes him into the hot tub just in time.  Lou uses his knowledge of the future and amasses a yacht, huge house and hair.  He creates Louggle and was the lead singer in Mötley Lüe.  He’s married to Adam’s sister and embraces Jacob (Clark Duke) as his son.

Nick (Craig Robinson) phones his 9 year old wife in 1986.  He vents his frustration about her cheating and him being emasculated.  Somehow in 2010 he has become a famous music producer and has his own company ‘Weber Productions’.  The guy his wife was cheating with is the receptionist at his company.  When Nick brings up the subject of cheating, Courtney (Kellee Stewart) said that she would never do that after the prank phone call she got when she was 9.

We don’t find out if and how Jacob’s life has changed except that he has riches and a family.

Phil (Crispin Glover), the bell hop, has two arms in 2010.  The boys changed history in 1986 when Phil had his arm cut off a passing truck.  The ski patrol were chasing the boys and helped Phil get his arm reattached. 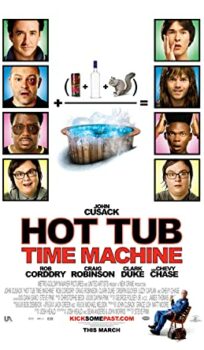