After Mavis finds out that Dracula endangered Dennis’ life in an attempt to teach him to transform into a bat, she rebukes him for doing that and for his apparent inability to accept that Dennis is human. She then says that she, Johnny, and Dennis will be moving to California after Dennis’ birthday party, upsetting Dracula as well as Johnny (though he doesn’t show or tell this to Mavis), who feels that he fits in better with the monsters because of his own peculiarities.

Mavis sends a party invitation to her grandfather Vlad, since she wants him to meet Dennis once before the big move. While she, Dennis, Dracula, Johnny, and Johnny’s family are having dinner together the night before the party, she tells everyone that she invited Vlad, which freaks Dracula out because Vlad’s hatred of humans is stronger than his was. He tells Johnny that they are going to have to turn this party into a monster masquerade party and disguise him as a vampire and his family as monsters so Vlad won’t harm them. When Vlad shows up outside the hotel the next night with his humanoid bat servant Bela, Bela smells humans and becomes enraged, prompting Vlad to tell him to stay outside. Soon after, Vlad meets Dennis, but when he notices he lacks fangs, he thankfully just believes that the kid is a “late fanger”. However, after Dennis leaves, he tells Dracula and Johnny that they must “scare” the fangs out of him by possessing something that Dennis finds sweet and innocent and frightening him with it until the fangs pop out. When the guy dressed as Dennis’ favorite children’s show character, Kakie the Cake Monster, approaches Dracula and Johnny and tells them that he wants to get his show underway, Dracula quietly tells Vlad that he can use him to achieve the desired effect. After Vlad leaves their company, Johnny voices his hesitance over this approach, so Dracula tries to put him at ease by saying that, if this works, then he, Mavis, and Dennis will get to stay here.

When Kakie begins to entertain the kids on stage, Vlad – hiding off to one side – possesses him and makes him demonic. This scares Dennis, and when he seeks protection and comfort from Dracula, Dracula can’t stand to see his grandson feeling this way and turns Kakie back to normal. Vlad comes out and protests this interference, but Dracula tells him that this just isn’t worth it. Mavis then gets enlightened by Dracula that this was just another attempt to make Dennis a vampire so that she, Dennis, and Johnny wouldn’t leave, and Johnny admits his involvement as well, saying that Dennis won’t be happy in California. Dracula, Mavis, Johnny, and Johnny’s parents then start to argue about what is best for the boy and who he really is, prompting a saddened Dennis to leave the hotel and go into the forest. Wayne’s daughter (and Dennis’ best friend) Winnie follows after him, and she tells him that it isn’t safe out here, so she takes him to a nearby treehouse she has. Meanwhile, Vlad learns about how Johnny and his family are human and is dismayed, but Dracula stands up to him, informing him that the mutual hatred between monsters and humans is over now, as well as how Dennis is a wonderful kid and he is a fool if he can’t love Dennis because he is half-human. After everyone then notices that Dennis is missing and start to look for him, Bela – having witnessed all that has transpired – becomes incensed at the sight of the humans and flies off to reach Dennis first.

Bela finds the treehouse and breaks in and seizes Dennis and Winnie, then tells them that he is holding them hostage and he and his brethren are going to reduce the hotel to rubble for accepting humans. Winnie then fights back, and he responds by throwing her to the ground. This angers Dennis tremendously, causing his latent vampire powers to finally emerge and his fangs to grow, and he sends Bela flying into a tree with a mighty roar. Bela then lets out a roar of his own to summon his family to him and battles Dennis just as Mavis and Dracula arrive ahead of everyone else, and they happily watch as Dennis beats up Bela and knocks him out. They, their monster friends, and Johnny’s family (Johnny shows up a little later on) then come up to Dennis, but Dennis senses Bela’s reinforcements drawing near and warns everyone. Together, the vampires and the other monsters give the beastly bats a serious pummeling until they all retreat.

Dennis asks Dracula if he is cool now that he is a vampire, but Dracula assures him that he has always been cool. Dennis then asks if he and his parents can stay in Transylvania since his vampire genes have manifested, and Mavis gives her approval. Just then, Bela springs out from a hiding place and attempts to stab Johnny with a sharp wooden stick, but Vlad suddenly appears and magically freezes Bela before he can. He orders Bela to never come near him or his family again, then shrinks him to a tiny size before he gets grabbed by Wayne’s children and licked mercilessly, and Dracula praises his father for saving a human. The gang then return to the hotel to finish celebrating Dennis’ birthday. 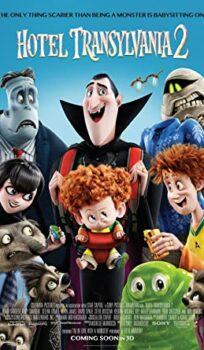