SHORT VERSION:
Ericka gets the Instrument of Destruction from beneath Atlantis for Van Helsing with help from an unwitting Dracula, but she is already questioning the morality of what she and her ancestor are doing, especially since she has formed a mutual attraction to Dracula.

At a dance party, Van Helsing takes over the DJ booth and reveals himself to the monsters, and Ericka stands at his side and sadly tells Dracula that she is his great-granddaughter. He then takes out the Instrument of Destruction – which turns out to be a case housing a music sheet – and plays the song on the sheet, which hypnotizes Atlantis’ Kraken into being a violent, destructive beast. It starts trying to kill all the monsters, but when Dracula’s life is threatened, Ericka refuses to let this happen and saves him, and she tells Van Helsing that what they are doing is wrong and then admits to having fallen for Dracula. The enraged Van Helsing has the Kraken keep on attacking, and Johnny then deduces that positive music is needed to counteract the negative song and free the Kraken. With Dracula using his powers to amplify the volume on Johnny’s laptop, Johnny has a DJ battle with Van Helsing that ends with Johnny selecting the “Macarena”, which proves to be so brain-dominatingly positive that the music sheet itself dances to the beat and rips itself up. When Van Helsing succumbs to the rhythm, he falls off the booth into a chasm the Kraken made, but Dracula flies down and saves him. After Dracula helps him to understand that they are all the same, be they monster or human, a repentant Van Helsing apologizes, then gives the monsters a full refund on the cruise before sending them back home.

Back at the hotel some months later, Dracula proposes marriage to Ericka, and she accepts.

LONG VERSION:
After the cruise ship docks at Atlantis, Ericka sneaks away to get into the temple below the city, since the Instrument of Destruction that Van Helsing needs to kill all of the monsters with is located there. However, Dracula sees her and follows her down, and after he reveals his presence to her, he saves her life multiple times from the booby traps guarding the Instrument (which she claims is a “family heirloom”), primarily in the form of an elaborate romantic-like dance up the steps to the altar. After she obtains the object, the temple starts to cave in, and Dracula gets her safely out.

Just then, Mavis appears, having tailed her father, and when she sees Ericka about to pull out an axe lodged in Dracula’s head, she mistakes this for Ericka attacking her father and uses her powers to seize her. Dracula orders Mavis to release her, and she only complies when he tells her that he “zinged” with Ericka. Mavis is in disbelief at this news since monsters are only supposed to zing once in their lifetime, and he had already done that with her late mother. When Ericka asks what it is, Dracula explains that it is like “love at first sight” for monsters, and even though she has developed a strong attraction to him by this point, she tells Dracula that she can never be with him because he is a monster and walks out of the temple, leaving Dracula heartbroken. Ericka returns to her hideout and gets the Instrument of Destruction to Van Helsing, and he gleefully tells her that they will bring all of the monsters together with a dance party and then use the Instrument on them, but her only reaction to this plan is to stare out of a porthole sporting a look of regret.

Later on, the monsters all gather in an arena connected to Atlantis for the dance party, and everyone is enjoying themselves except for Dracula. This doesn’t go unnoticed by Mavis, and she expresses to Johnny her disbelief about how her father zinged with a woman who she believed tried to kill him. Johnny insightfully tells Mavis that their own relationship was unheard of at one time, but it came to pass, and when she then voices her worry about losing her status with her father if a new woman comes into his life, Johnny assures her that the bond between her and her father is unbreakable. Mavis then comes up to Dracula and tells him to go to Ericka, and also says that she was worried about losing him because, if he got married to Ericka, he would likely stay on the ship and travel the world with her. Dracula promises her that nothing will ever take him away from her or his family, plus he would never live on a boat. They then hug each other, and Mavis restates to Dracula that he needs to talk to Ericka, for she knows Ericka can make him whole, and he can’t deny a zing.

Suddenly, Van Helsing commandeers the DJ booth, and after announcing his presence to everyone, he shows off the Instrument of Destruction and tells Dracula that this will rid the world of him and all monsters. Dracula replies that that is just Ericka’s family heirloom, but then Ericka walks sadly up to Van Helsing’s side, and Van Helsing then has Ericka inform Dracula that she is his great-granddaughter. Van Helsing then opens up the Instrument, which turns out to actually be a case containing a music sheet. He sets the sheet up in front of a keyboard and starts playing the song on it, which causes the singing Kraken sleeping below to wake up and become hypnotized into a violent, destructive beast. It demolishes the bridge connecting the arena to Atlantis to trap the monsters, then slams its tentacles down everywhere to try to kill them all, creating a chasm down the center of the island in the process. Dracula tries to fly up to Van Helsing, but is caught by the Kraken and can’t overpower it. When the Kraken begins to crush him, Ericka can’t take it anymore and decides to switch sides, and with help from Dennis’ big puppy Tinkles, she jumps up to the Kraken and kicks it in its left eye to make it relinquish its grip on Dracula, then saves his weakened body from falling into the chasm. Ericka tells Van Helsing that he is wrong about the monsters and that Dracula saved her life, then apologizes to Dracula for trying to kill him all this time. She has now accepted just how wrong she was and how wrong all of this was, and then admits that she had zinged with him as well. When Van Helsing asks what that is, Dracula explains it, and Van Helsing – enraged that his descendant has fallen for his archenemy – has the Kraken knock them into the chasm, but Dracula flies them both back up. The Kraken then hits them a second time, and Dracula protects Ericka from the attack, but she is left dazed.

Johnny comes up to Dracula and says that the evil music is what is controlling the Kraken, and believes that the only way they can counter Van Helsing’s beats and free the Kraken is with positive music. Johnny gets out his backpack and sets up a DJ booth of his own with it, then tells Dracula that he will play the tunes on his computer and Dracula must amplify the sound with his powers. The first two songs Johnny selects break the Kraken out of its trance, but Van Helsing puts it back under each time with his song. Just as the Kraken grabs the section of floor Dracula and Johnny are standing on and pops them all into its mouth, Johnny finds and selects “Macarena” by Los Del Rio, believing this to be the most brain-dominatingly positive song. Sure enough, the music turns the Kraken back to normal again (and it puts Dracula and Johnny safely back on the ground), and it is so addictively positive that Van Helsing’s song cannot bring the Kraken back under its power, and the music sheet even dances to it until it rips itself to pieces. When Van Helsing himself succumbs to the rhythm, he loses his footing and plummets into the chasm, but Dracula flies down and saves him. Van Helsing asks Dracula why he bothered to do that, and Dracula replies that he had to be greater than hate and says that, monster or human, they are all the same. The repentant Van Helsing apologizes, then tells the monsters that he will give them a full refund on the cruise. Everyone gets back onto the cruise ship and departs.

Back at the hotel some months later, Dracula takes Ericka up onto the roof and proposes marriage to her. Despite some initial incoherent babbling similar to what Dracula uttered when he first met her, she soon regains her speech and happily accepts. 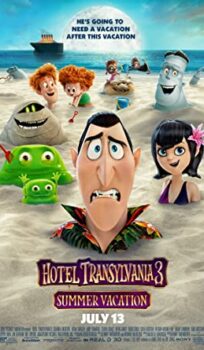