Count Dracula (John Carradine) and Lawrence Talbot (Lon Chaney, Jr) both come to seek a cure for their afflictions from Dr. Edelman.

Edelman begins working on their cures at once (by transfusing his blood with Dracula’s and collecting a special mold spore for Talbot) but kills Dracula with sunlight when he sees him entrancing one of his nurses.

The castle collapses in flames started by the lab chemicals, destroying the Frankenstein monster. 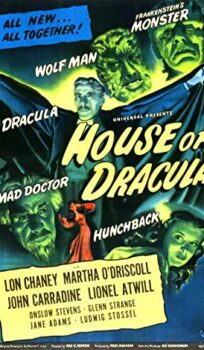