Dr. Niemann (Boris Karloff) and his hunchbacked friend Daniel (J. Carrol Naish) escape from prison where Niemann had been held for 15 years due to his unlawful experiments on dead bodies. They escape by killing the owner of a traveling horror show and taking it as their own. One of the attractions is Count Dracula’s (John Carradine) bones in his coffin, which come to life when Niemann removes the wooden stake pinning it down.

Niemann uses Dracula to kill one of the men who sent him to prison and when the authorities are after Dracula he callously throws the coffin off the moving wagon and Dracula dies in the sunlight.

Niemann and Daniel travel on (picking up an abused gypsy girl named Ilonka that Daniel falls in love with) to the collapsed ruins of Ludwig Frankenstein’s house where they are looking for Frankenstein’s diary with the secrets he discovered. They find the Frankenstein monster (Glenn Strange) and the Wolf-Man/Larry Talbot (Lon Chaney, Jr) trapped in ice. Once thawed, Talbot finds the diary for Niemann and they are off to Niemann’s laboratory where he has promised cures for Talbot and Daniel.

In reality, Niemann plans to experiment on Talbot, the monster and two more of the men who sent him to prison by transplanting brains.

Ilonka shoots Talbot with homemade silver bullets when she sees him transform, but it is too late as he has attacked her and they die together. Daniel becomes enraged over Ilonka’s death and attacks Niemann, but the monster seizes Daniel and throws him out the window. The monster picks up Niemann and runs through the countryside chased by crazed villagers and ends up in a quicksand swamp, where both he and Niemann sink to their deaths. 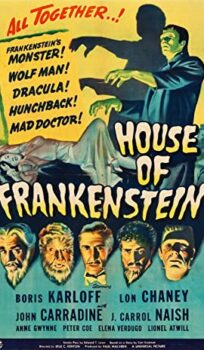