Showboat (Michael Colyar) – whom Peter (Christopher “Play” Martin) misled into giving him $3000 to have Sex as a Weapon (the band TLC) booked on one of his tours, despite the fact that Peter and Chris (Christopher “Kid” Reid) failed to get the band signed to their management company and Peter subsequently used the money for Chris’ bachelor party – has his all-female security force capture Peter and Chris the night before the bachelor party and bring them to his office. He tells them that he just had a talk with Sex as a Weapon and found out that, contrary to what Chris and Peter told him, they weren’t signed to any deal with them. He then warns the duo that they will be in a lot of trouble if the band doesn’t sign his tour contract by tomorrow.

After getting out of his terrible bachelor party in a ballroom at the Densmore Hotel (made terrible thanks to his three young cousins [the band Immature] orchestrating the move of the right guests, the stripper, and the food over to their party at Aunt Lucy’s [Ketty Lester] house), Chris crosses paths with Sidney (Tisha Campbell) in the hallway, and she explains that she is here for her grandparents’ wedding anniversary. She wishes him and Veda (Angela Means) a happy marriage, then gives him a hug and a goodbye kiss on the cheek before she returns to her family. However, Veda and Janelle (Khandi Alexander) have shown up and witnessed this, and Veda – already paranoid over Sidney being back in town – mistakenly believes that Chris has had a secret fling with her. She and Chris get into an argument about it that quickly worsens, but it is brought to a halt by Janelle and Peter. They take their respective friends elsewhere and set them both straight about their behavior, and Chris and Veda return to each other and kiss and make up. Chris then gets a phone call from his uncle Vester (Bernie Mac) saying that his cousins are having a raucous party at Lucy’s house and he’d better get over here because the cops are trying to shut it down.

Chris, Peter, Veda, and Janelle head over there, and Peter sees what is going on and decides to make this party the real bachelor party, and he manages to persuade the cops to let the party continue after explaining that Chris is getting married. Shortly afterward, Showboat shows up with his henchwomen since it has gone well past the midnight hour, and the women seize Chris. Showboat threatens him with castration if he doesn’t get his $3000 back right now since he and Peter failed to get the deal made, but Chris replies that the cash has been spent. Thankfully, before the henchwomen can cut off his genitals, Showboat overhears Chris’ cousins performing inside and likes what he hears, and Chris tells him that they are a new band that he and Peter signed to their company and they were about to call him to tell him to come check them out. Peter then appears with Sex as a Weapon, who tell Showboat that they are with Kid n’ Play Management now, having opted not to sign with Coldblood Management after hearing about how they treated a trio of blind rappers poorly. Showboat decides to sign both acts on for his tour and pays Peter for the extra group, and Peter gives Chris some of the cash to cover his honeymoon expenses. The cousins then present Chris with some money to compensate him for giving him a hard time, but Lucy takes it from Chris and says that it will go towards the cleanup of her home after the party ends. Chris and Peter then perform with Sex as a Weapon.

The next day, Chris and Veda wed, and Peter gets Chris a new jeep as a wedding present. 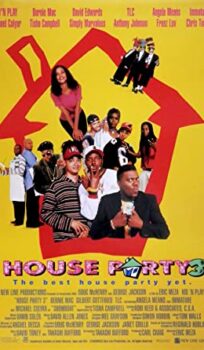