SHORT VERSION:
Chris and Dylan put on a great performance at their house party, and Chris manages to win the affections of his longtime crush Autumn, but the boys find out that the man they believed to be Kickpower Records executive Keniston Scott is not him, and Chris ends up shutting the party down after the partiers cause too much damage to the inside of the house, specifically the toilet breaking through the bathroom floor and into the living room during his and Dylan’s performance. He and Dylan then have a falling out over having this party, among other things, and Dylan leaves with his love interest Morgan. However, Dylan and Morgan later return with people working for various services to clean and fix the house, and Dylan tells Chris that he just sold his car to get the money for them. The two friends then reconcile.

Chris’ parents, Melvin and Mimi, return home in the morning and initially don’t suspect a thing, but Mimi finds out what really happened when she is forwarded a link to the toilet breaking incident that someone recorded on their phone. Around the same time, Keniston Scott appears outside, where he is greeted by Dylan, Autumn, and Morgan, and he lets them know that he saw the video – which has already gone viral – and tells Dylan that he loved his and Chris’ performance. Dylan brings Chris outside before he can get a tongue lashing from his parents over last night’s shenanigans and gives him the good news, and Keniston offers the boys a development contract and says that he wants them in the recording studio in New York in two weeks. After promising his parents that he will still attend college, Chris gets their blessing.

Two weeks later, Chris and Dylan leave for New York with Autumn and Morgan. The boys enter the studio and are greeted by the label’s owners, Kid N’ Play, who promise to show them what a real house party is after they get their first track recorded.

LONG VERSION:
As Chris (Tequan Richmond) and Dylan (Zac Goodspeed) are doing a rap number to impress a well-dressed guy that they think is Kickpower Records executive Keniston Scott, Precocious (Alanka Craffert) and Jerry (De Klerk Oelofse) are having sex on the bathroom toilet directly above them, and their wild lovemaking in addition to Precocious’ weight causes them to crash right through the floor and land in the living room. The partygoers recording the performance on their phones record this as well, and the DJs Bootytime (Julian Works) and Hardcap (Ambrose Uren) soon decide to move the party out to the backyard, and Precocious and Jerry wind up becoming the stars of the party. Chris and Dylan also get to talking with the well-dressed guy, but to their dismay, they find out that he is not Keniston Scott, but a limousine driver who brought a bunch of kids here.

After Chris and Autumn (Tristin Mays) spot the latter’s boyfriend Quentin (Keith Powers) getting more than a little friendly with another woman, Chris takes Autumn out onto the floor and has a dance with her. Chris’s older neighbor Victoria (Rolonda Watts), who yearns for him and had already once tried to initiate an intimate encounter with him without his consent, pushes Autumn aside and aggressively puts the moves on Chris again, but he fiercely resists her until she finally gives up on him. A short time after Quentin returns to Autumn, she tells him that they are through, and he begins to physically threaten her until Chris comes to her defense. They get into a fight, but it lasts less than 30 seconds thanks to Quentin knocking Chris out. As Autumn tends to Chris and restates to Quentin that he can go screw himself, Quentin tells her that she can have Chris and he will just call up one of his other flings. The other partygoers boo him heavily, and as he turns his back to them while heading out, they pelt him with a bunch of water balloons. He then stomps on out the door in a huff.

When Chris regains consciousness, Dylan tells him that it wasn’t the smartest idea to take on Quentin, to which Chris replies that letting him talk him into having this party wasn’t so smart, either. After he and Dylan hear something break inside, they go in, and Chris surveys the damage that’s already been done and tells Dylan that this is all his fault, as is his decision to have this party in the first place. Dylan accuses him of agreeing to go along with this party because he felt sorry for deciding to ditch him (Chris had stated that he was going to college and was just going to pursue rap as a side gig), and he calls out Chris on how he didn’t defend him when his father Melvin (Gary Anthony Williams) called him a loser while they were chatting on Skype. He tells Chris that he is just scared that he won’t make it as a rapper, so he acts like he doesn’t want it, and Chris retorts that he has new responsibilities and adds that, one day, he will need to grow up as well because they aren’t kids anymore. Dylan takes off moments later, and his love interest Morgan (Alex McGregor) leaves with him (off-screen). Having eavesdropped on their chat, Autumn tells Chris that he was mean to Dylan, but she also gives him her thanks for standing up for her. When she asks why he did so, Chris informs her about the crush he has had on her since they were kids, and she kisses him in response. However, the mood is spoiled when a partier hurls himself through a nearby window, and considering this the last straw, Chris shuts down the party and orders everyone to go home. As Victoria is leaving, she complains to her friend Tracey (Julie Hartley) that she can’t attract anybody anymore, and Tracey takes the opportunity to profess the feelings that she has had for her for a long time. She then kisses Victoria passionately, and Victoria finds that she enjoys it very much, so she and Tracey head over to her place. Autumn decides to stay and hang with Chris for a while, and they fall asleep on the couch.

Some time later, Dylan and Morgan wake them up, and Dylan tells Chris that he is here to clean up the mess he made. Morgan then brings in four maids for the basic cleaning, a couple of plumbers to install a new toilet, a couple of carpenters to fix the hole in the ceiling, and top-shelf booze to restock the liquor cabinet with since the partygoers drank everything that was in it, and he explains to Chris that he just sold his car so he could hire these services. He apologizes for using him tonight and claims that he has no real talent between them, but Chris reminds him of how he produced the tracks and hustled the connections, and says that, without him, he probably never would’ve taken any risks at all because he, admittedly, is afraid of failure. A little later on, Chris goes out to the garage and sits in the new car his parents gave him, and Autumn comes in and starts to make out with him in the back seat.

Melvin and Mimi (Jacqui Achilleas) return home moments later, and with the house now looking copacetic, they initially don’t suspect a thing. However, Melvin catches Chris and Autumn in the car, and Mimi finds that a viral video of the toilet breaking incident is making its rounds on the Internet after she spots multiple links to the video in her e-mail and checks out one of them. As this happens, Dylan, Morgan, and Autumn are greeted in the driveway by the real Keniston Scott (Langley Kirkwood), and he tells Dylan that, despite missing the party, he didn’t miss the best part of it: He, too, saw the viral video and mentions that it has received eight million views in less than 12 hours. Just as Chris is about to get a tongue-lashing from his parents over last night’s shenanigans, Dylan runs into the house and tells him about how Keniston saw the video and loved their rap number and is standing outside right now. Everyone is then shown gathered in front of Keniston, who tells the boys that he liked their rapping skills and their overall talent as singers, and then he offers them a development contract and says that he wants them in New York in two weeks to meet the heads of the record label and to start working in the studio. Chris tells his parents that he only wants to do this if they are behind him, and he will still go to college as promised. After discussing the matter between themselves, they decide to give Chris their blessing, and Melvin gives Chris the keys to the new car so he can go to New York in style. Two weeks later, Chris and Dylan depart for the long drive, and they pick up Autumn and Morgan as they go.

In a mid-credits scene, Chris and Dylan meet with the co-presidents of Kickpower Records, who will be producing their first single, and they turn out to be Kid ‘N Play (Christopher “Kid” Reid & Christopher “Play” Martin). They promise Chris and Dylan that, once they are done with recording their first track, they are going to show them what a real house party is supposed to be. However, after watching Chris and Dylan do their version of the Funky Charleston dance, they tell them to not do it ever again. 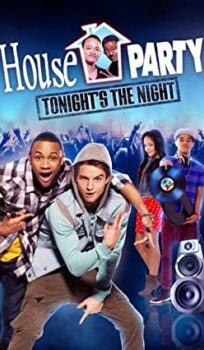