Shortly after confronting the gang on the bridge and having been able to bond with Will (Theo James) and earn his trust and respect, Tom (Forrest Whitaker) dies from his wounds. After this, the car fails and breaks down; Will torches it, with Tom’s body inside, and continues alone on foot. But then, a family picks him up on the road and they make it to Will’s father’s house. He strikes a deal with the family man (David Lewis) and lets him and his family stay at the house -where there is water, supplies and a generator with enough gas for a few days- in exchange for the vehicle, which he uses to continue towards Seattle.

As Will reaches the city, he finds it lying in ruins, apparently due to some volcanic event, since ash is seen falling from the sky and slight tremors are felt everywhere. He reaches the apartment where his fiancé Sam (Kat Graham) was staying and finds a note on the door, directing him to a cabin in the nearby woods. He finds the cabin and sees Kat with Jeremiah (Mark O’Brien), a neighbour who brought her there; they reconnect.

As they all share a peaceful moment together, Jeremiah starts displaying an unsettling behaviour, fuelled by a conspiracy theory that the whole event was man-made, rather than a natural cataclysm; this gets Will suspicious. The next morning, he sees Jeremiah, apparently searching through the vehicle that Will was using. Will confronts Jeremiah, who excuses it as “two kids he saw lurking into it and they should go walk around the perimeter, to find them”. While around the area and perceiving the environment is getting ready for another catastrophic event, Jeremiah tries to shoot Will, who, in turn kills him in self-defense. He goes back, gets Kat and they both drive away, as another major tremor happens, triggering a new volcanic eruption with a colossal, fast-moving pyroclastic cloud.

The last sequence finds Will and Kat trying to speed away from the overcoming deadly cloud, towards the North, as they reassure their love for each other. The movie ends, not leaving clear if they will be engulfed by the volcanic cloud and die, or if it subsides and they manage to escape it safely. 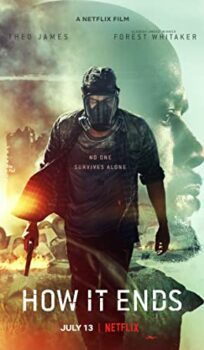