How the Grinch Stole Christmas(2000)

The denziens of Whoville wake on Christmas morning to find that the Grinch (Jim Carrey) has stolen all of the holiday’s trappings. The Mayor (Jeffrey Tambor) blames the disaster on Cindy Lou Who (Taylor Momsen) for convincing them to invite the Grinch to the Whobiliation, the outcome of which inspired him to commit the theft. But her dad stands up to the Mayor and points out that everyone but her had lost touch with the holiday’s true spirit, and that the stolen things are just that — things. The Whos realize he’s right, and they hold hands together and “Welcome Christmas” in song.

The Grinch is moved by the Whos’ unwillingness to let his actions get them down, and his heart grows three sizes. However, the sleigh upon which all the trappings have been stacked starts to tetter off the mountain. The Grinch struggles to pull it to safety and is tempted to let it fall (“It’s just toys…”) – until he realizes Cindy is on top, having come to check on him. He manages to lift the entire sleigh up over his head, and soon they and Max the dog are headed back to Whoville with the lot.

The Grinch arrives and apologizes for what he did, and the Whos decide not to punish him; moreover, Martha May (Christine Baranski) decides to turn down the Mayor’s wedding proposal to be with him. The Grinch joins in with the singing, and later everyone enjoys the feast of roast beast (carved by him, of course) at his lair. 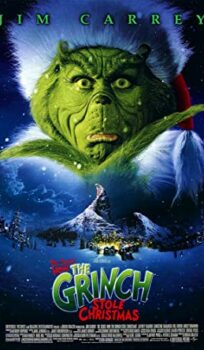