How to Train Your Dragon: The Hidden World(2019)

Pooper:
Hiccup and the vikings of Berk defeat Grimmel and save the dragons. Toothless takes the remaining dragons of the earth back to the Hidden World beneath the sea. In a flash forward, Hiccup brings Astrid and their children to meet the dragons.

Longer:
A year after the defeat of Drago and his Bewilderbeast, Hiccup and the vikings of Berk fight to free captured dragons from other viking hunters. Berk becomes overwhelmed by its dragon population, and with a threat from a new hunter named Grimmel, Hiccup decides to move the tribe to the Hidden World of the dragons that his father Stoick had told him about when he was a child. The dragons transport the vikings to a temporary camp at an island on top of a large cliff, where no ship can dock. The vikings begin to embrace the island immediately, and name it “New Berk.”

To distract Toothless, Grimmel releases a female Night Fury, later named by Astrid as the “Light Fury”, with whom Toothless becomes immediately smitten. In order to give them privacy, Hiccup makes a tail fin sail that allows Toothless the freedom to fly without a rider. The sail’s dragon scale primer makes it fireproof as well.

Toothless follows the Light Fury into stormy clouds, where he learns to harness the energy of lightning in order to disappear into the sky (the Night Fury’s signature move). Impressed with his skill, the Light Fury leads him to the Hidden World of the dragons, not far from New Berk. Toothless is immediately established as the Alpha of the dragons.

Hiccup and Astrid find the hidden world looking for Toothless on Astrid’s dragon Stormfire. The dragons return to New Berk and the Night Furies are captured by Grimmel, who threatens the Light Fury in order to get Toothless to command the dragons away from New Berk onto the ships. But Hiccup and his gang use their gliding armor suits to ambush the ships and free the dragons. Hiccup and Grimmel fight very briefly before Grimmel takes control of the Light Fury using his dragon’s venom. Hiccup and Toothless pursue Grimmel, who paralyzes Toothless using the same Venom. Hiccup releases the Light Fury from Grimmel’s control and tells her to save Toothless and he and Grimmel plummet to the sea, Grimmel tearing apart Hiccup’s glider to ensure they both die. The Light Fury saves Toothless and then nosedives to save Hiccup just before Grimmel is shown hitting the surface of the sea.

Knowing that only the vikings of Berk appreciate the dragons, Hiccup tells Toothless to take the remaining dragons of earth back to the Hidden World where they can live undisturbed by humans until the day we can live in peace. Hiccup and Astrid marry, and years later are shown bringing their son and daughter alone to the edge of the world to meet and fly with Toothless, the Light Fury, their babies, and Stormfire.

THE END (or so we have been led to believe)

The departure scene is like 5 Pixar movies at once. Best trilogy since Kung Fu Panda. This is why you take your time to make sequels.

Herb not only supplied this ‘pooper…he also did: 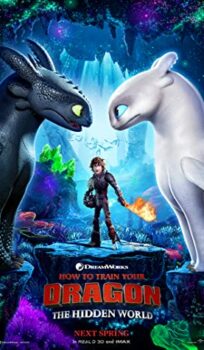