The Dark Overlord-as-Jenning (Jeffrey Jones) takes Beverly (Lea Thompson) back to the laboratory and straps her down to a table underneath the laser spectroscope, intending to use her as a host body for one of the many other Dark Overlords he intends to bring to Earth with the device. Howard and Phil (Tim Robbins) get to the lab a short while later, and Phil gets out an experimental neutron disintegrator laser from a storage locker, believing that this weapon would stop Jenning.

After some zaniness, Howard shoots the disintegrator at Jenning at the same time Jenning shoots energy at him, resulting in a beam fight, and the combined powers eventually create an explosion. Once the smoke clears, Howard, Phil and Beverly discover that the laser only succeeded in expelling the Dark Overlord from Jenning’s body. The Overlord bursts out through the floor, and soon seizes Howard and activates the laser to bring the other Dark Overlords to Earth. Howard manages to get free of his grip and man the disintegrator, blasting the Dark Overlord with it and destroying him. Howard and the others then notice the other Dark Overlords coming, and though he knows he is destroying his only way of returning to his home world, Howard uses the disintegrator to blow up the spectroscope and send the Overlords back to their dimension.

Howard becomes the manager of Beverly’s band, and Phil becomes the head of the band’s stage crew. The movie closes with the band performing “Howard The Duck” to a huge audience, and Howard even joins them on stage and plays guitar. 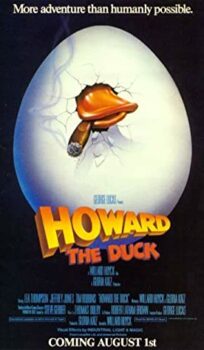