Pooper:
Jim, Dr. Drake, and Johnny kill all the Humanoids and save the town (and Jim’s wife and son survive their encounter with the Humanoids too). The film ends with Peggy giving violent birth to a new form of hybrid humanoid.

Long Ending:
We open on a small fishing town that is struggling due to a decrease in salmon. There is a debate in the town as to whether to welcome in a big fishing corporation called CanCo., which wants to open a new canning factory. Meanwhile, one group of fishermen are attacked and eaten by a mysterious creature.The morning after the attack on the fishermen, the Townsfolk wake up to discover that all the dogs in town have been brutally killed. Hank Slattery (Vic Morrow), the primary supporter of CanCo, works to keep the dog attack and missing fishermen quiet so that CanCo does not cut ties with the Town. Jim Hill (Doug McClure), a respected town member, begrudgingly goes along with the plan.

Later that night, the Town hosts a big dance sponsored by CanCo. At the dance, CanCo’s scientist Dr. Susan Drake (Ann Turkel) says that CanCo has been working hard to ensure that the waters are re-stocked with newer and more virile salmon. The Town is excited, but the party is interrupted by Johnny Eagle (Anthony Pena), an Indian who is opposed to CanCo. He yells that his dog has been murdered and blames Hank for his dog’s death. He vows to do everything he can to stop CanCo from coming to Town. Hank has his cronies drag Johnny outside where they begin beating him up. Not willing to condone an unfair fight, Jim and his relative Tommy join the fight on Johnny’s side. The police eventually break up the fight, though Hank is still angry that Johnny has threatened the CanCo deal. Meanwhile, fish-like creatures called Humanoids begin emerging from the water and killing every man they see. Worse yet, the Humanoids also begin raping every woman they come across.

Hank soon learns that Johnny has found a lawyer who will work pro bono to help him sue the town to stop CanCo and preserve Johnny’s native fishing rights. Hank convinces his cronies that Johnny must be killed in order to ensure the Town’s survival and viability. They blow up Johnny’s house while he is having dinner with Tommy and Tommy’s girlfriend. The trio are unharmed, but the Humanoids take advantage of the situation to kill Tommy and his girlfriend. Having seen the Humanoids, Johnny finds Jim and Dr. Drake to t ell them about the situation. The trio go out to find the monsters that killed Tommy. They eventually find and kill a Humanoid and take it back to CanCo headquarters for dissection.

Dr. Drake reveals that CanCo had been genetically modifying a new species of salmon that would flourish in these waters (and thus, provide ample fish for their proposed cannery). The fish escaped and were eaten by a native prehistoric fish. This apparently caused the prehistoric fish to evolve at an unprecedented rate, ultimately becoming these vicious and amphibious Humanoids. She theorizes that the evolution into Humanoids has caused the monsters to want to procreate with human women in order to further evolve, and eliminate human men as their competitors for the women. Dr. Drake wanted to report the escape of the salmon to the public, but CanCo had forbidden her from doing so.  The trio realize that that night is the scheduled Town carnival on the Boardwalk, attracting visitors from throughout the region. They rush off to warn the carnival-goers of the danger.

They get there and warn the crowd, but the Humanoids then begin attacking en masse. Many men are killed and women raped (although at least one woman manages to kill a Humanoid). Hank shows he has a good side, saving a young girl from the clutches of a Humanoid. The Humanoid attacks and almost kills Hank, but after hesitating to do so, Johnny decides to save Hank. Eventually Jim and Dr. Drake manage to set all the Humanoids on fire and kill them. Jim’s wife and baby son stayed at home and were attacked by two Humanoids, but Jim’s wife managed to successfully kill them both all on her own. Jim runs home and is happily reunited with his family, believing the danger to have passed.

Meanwhile, back at CanCo headquarters, Dr. Drake is with Peggy Larson, the only woman to have survived her rape. Peggy is giving birth and Dr. Drake is urging her to push as hard as she can to deliver the baby. To Dr. Drake’s horror and surprise, the hybrid and evolved Humanoid baby instead bursts through Peggy’s stomach and opens its fang-filled mouth to let loose a primal cry. 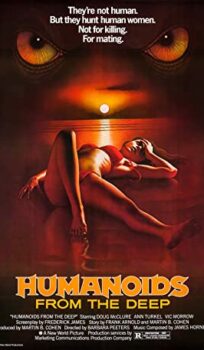