POOPER:
After learning of his father’s cancer diagnosis, Bart forgives him and they live happily together until he dies. Bart writes “I Can Only Imagine” in memory of his father, and Amy Grant agrees to record it. When she is to debut the song, she cannot bring herself to sing it and calls Bart on the stage, who performs it to a loud and long ovation. Bart sees Shannon in the audience, and he jumps off the stage and hugs her. They get back together and eventually marry. Amy gives the song back to Bart and his band MercyMe, and it becomes the best-selling Christian song of all time.

LONG VERSION:
Bart Milliard (J. Michael Finley, in his movie debut) lives with his abusive father Arthur (Dennis Quaid) in Greenville, Texas. Bart, who enjoys music and likes to sing to himself, is always trying to find ways to please his father. Since Arthur was a high school football star, Bart joins the football team, but he has his leg broken during practice and cannot play anymore. With all other electives filled, Bart joins the Glee Club as a sound technician. But after his teacher overhears him singing, she taps him to play the lead role in the school production of Oklahoma. He reluctantly accepts the role, and he gives an impressive performance. Meanwhile, Arthur is having dinner at a local diner when he sees a flyer for the performance, and after seeing Bart’s name on it, he collapses and is taken to a local hospital. It’s there that he learns that he may have pancreatic cancer, but he refuses treatment for it and goes home. He tells Bart that he just had low blood sugar and goes to bed.

The next morning, Arthur wants to know why Bart didn’t tell him about appearing in Oklahoma, and Bart answers that he didn’t think he would care. Since he was little, Bart has always heard from his father that he will be a failure at being a singer, which is something he has considering doing as a career. They soon get in a fight, which ends with Arthur smashing a plate over Bart’s head. He heads to church, where he meets his girlfriend Shannon (Madeline Carroll). He tells her that once he graduates high school, he’s leaving Greenville and never returning. He also vents his anger from his fight onto Shannon, and he breaks up with her. After the graduation ceremony, which Arthur does not attend, Bart moves to Oklahoma City and soon joins a band, and they begin to call themselves MercyMe. The name comes from a phrase that his grandmother (Cloris Leachman) often says.

After several months of traveling from gig to gig trying to make a living, MercyMe is able to recruit Scott Brickell (Trace Adkins) to be their manager, and he is able to book the band to a showcase in Nashville. Bart invites Shannon to go with them, but since she is still hurt by his sudden breakup, she refuses to go with. Now in Nashville, Bart meets one of his musical heroes, Amy Grant, and they become friends. At the showcase, the band performs a great show, but every single executive who attends the show refuses to sign them to a record deal. They all say he’s not good enough, and instead of hearing them, all Bart hears is his father saying he’s not good enough, and now he wants to quit the band. Brickell talks him out of quitting, and Bart tells the band that instead of quitting, he needs to take time off to go sort out his personal issues.

Back in Greenville, Bart goes home and learns that Arthur now a Christian. Arthur acknowledges that he has been a bad father and asks for his son’s forgiveness. Bart is skeptical of his father’s conversion and refuses to forgive him. Thinking that coming home was a mistake, Bart prepares to leave, but he comes across the paperwork from the hospital that states that Arthur not only has pancreatic cancer, but it’s terminal. Now realizing that his father’s conversion is genuine, Bart forgives Arthur and he moves back home. While Bart and Arthur are living happily together, Bart is also trying to reconcile with Shannon. He has been leaving her long messages about his life and keeps trying to convince her to join him on tour, but she refuses to return his calls. A few weeks after Bart returns home, Arthur dies. Following the funeral, Bart leaves Greenville again and rejoins the band.

Needing a way to express his feelings about his dad, Bart writes a song titled “I Can Only Imagine”, and everyone agrees that it’s the best song he’s written. Brickell sends the demo to Amy Grant, and she agrees to record it for her next album. She’s going to debut it at her next concert, and Bart calls Shannon to invite her to the show. This time, his message includes a heartfelt apology for breaking up with her the way he did. She tries to pick up the phone to talk to him, but he hangs up before she can say anything. At the concert, Amy is about to perform the song, but she cannot bring herself to sing it. She calls Bart onto the stage, and she says that the song is his story, and he needs to sing it. He sings the song, and after he finishes, all he sees is an empty theater except for his father in the audience, who is giving him a standing ovation. Bart snaps out of it when he hears the actual audience giving him a long and loud ovation. While looking out at the crowd, Bart sees Shannon, and he jumps off the stage and runs to her and give her a big hug and tells her he loves her, and she says that she loves him too.

The movie ends with title cards saying that Amy gave the song back to Bart and MercyMe, and they made it the best-selling Christian song of all time. The song also crossed-over to mainstream radio, and it was a hit there as well. Bart and Shannon got back together and later married, and as of 2018, MercyMe had recorded 21 #1 songs. 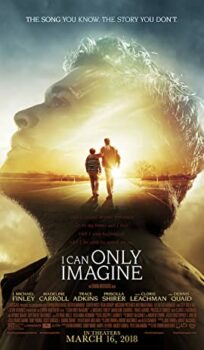