Short version:
Zooey calls Sydney and invites him to the wedding. Sydney arrives just before the objection part. Sydney and Peter make up. This is where they get into a ‘I love you, man’ match. Peter and Zooey get married with Sydney by Peter’s side.

Peter’s fiancee, Zooey (Rashida Jones), is upset since Peter has changed because of this friendship. She is further ruffled when she learns that Peter loaned Sydney $8000 just before their wedding. Turns out Sydney used the money for billboard and bus ads for Peter so that he could sell the Ferrigno place and get enough money for the land he wanted to build a home on.

Peter breaks up with Sydney stating that he should grow up. Peter’s wedding party consists of various men including Ferrigno. Peter is sad because he has no best man for his wedding party. Zooey sees this and calls Sydney. Sydney gets the call while on his scooter in a tux heading for the wedding.

Sydney gets there just in time for the objection part. Peter and Sydney make up. Sydney gives Peter a cheque for $8000. He said that even though he doesn’t look or act like it he is actually a good investment broker. This is where they get into a ‘I love you, man’ match until the priest puts a stop to it. Peter and Zooey get married with Sydney by Peter’s side. 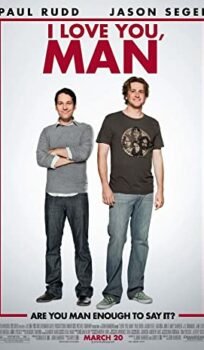