Pooper:
Willy returns from the dead and saves Arthur from being killed by Cornelius’ dad. The two reconcile and escape the prison together.

Long Ending:
The film opens in old England as a convicted murderer named Willy (Larry Fessenden) is beheaded in a public execution. Meanwhile, a man dressed as a priest (Ron Perlman) visits Willy’s friend and fellow convicted murderer Arthur (Dominic Monaghan). The priest explains that he’s been charged by the Church to collect the stories of the damned and convinces Arthur to tell him his story before his execution.

Arthur states that he and Willy were not murderers, just grave robbers who were wrongfully convicted. When Arthur was a poor child, Willy took him under his wing and began teaching him how to make money by stealing corpses and selling them for cash to scientists. A mad scientist named Quint (Angus Scrimm) eventually forces the pair to work for free under the threat that he will turn them into the police. One night, they mistakenly liberate a vampire from her grave. The pair subdue the vampire and deliver her to Quint. The vampire awakens and kills Quint, allowing Arthur and Willy to enjoy freedom from his oppression.

The pair become well known for their ability to find and retrieve undead monsters and aliens. They are handsomely paid by wealthy collectors of the occult to deliver the undead. This leads to them coming into conflict with a man named Cornelius (John Murphy), whose family also raids graves in search of the undead. Unlike Willy and Arthur, Cornelius and his gang are willing to rob and kill others in pursuit of a dollar. The priest encourages Arthur to focus on stories about Cornelius, and Arthur obliges.

Arthur explains that one night, he, Willy, and Arthur’s girlfriend Fanny (Brenda Cooney) learn that a pair of zombies being shipped to Britain washed up on a nearby island when the ship transporting them sank. The purchasers of the zombies have hired Cornelius and his gang to retrieve the zombies and will pay a huge reward for the zombies’ retrieval. Although Willy is particularly opposed to interfering with Cornelius, Fanny convinces the pair to pursue the zombies.

They arrive on the island to find that Cornelius captured one of the zombies, which is being guarded by one of his gang members. Fanny ambushes the guard and kills him (violating Arthur and Willy’s code of non-violence). They try to take the zombie, but it escapes and bites Willy. Cornelius and the rest of his gang arrive and kill Fanny and subdue the zombie, Willy, and Arthur. Cornelius plans to kill the duo, and Arthur buys time by claiming he wants to join Cornelius’ gang (much to Willy’s anger). Arthur successfully distracts Cornelius long enough that the zombie escapes and attacks. Cornelius and his gang are then ambushed by the second zombie. Arthur and Willy escape as Cornelius and his gang are devoured. When they return, the duo splits up (with Willy being angry at Arthur’s seeming betrayal when he offered to join Cornelius).

Arthur’s story is complete, the priest reveals he is Cornelius’ father who is out for revenge. The father begins to beat up Arthur, promising to kill him slowly. Suddenly, Cornelius’ dad is fatally stabbed by… Willy. Thanks to being bitten by the zombie, Willy is now undead himself. The pair reconcile, with Arthur explaining he was lying about wanting to join Cornelius. As they escape from prison, Arthur promises to sew Willy’s head back on his body, and Willy jokes that he will bite or eat Arthur. During the credits, we see that Cornelius has also been turned into a zombie and is swimming back to England. 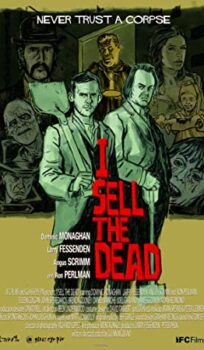