SHORT VERSION:
As the Herd and Buck get closer to Lava Falls, Ellie begins to go into labor and yells out the code word “Peaches” to Manny to let him know of it, and Buck hears the cries of Sid being attacked by his enemy Rudy. Buck takes Crash and Eddie on ahead with him to rescue Sid while Manny and Diego stay behind to help Ellie through the birthing process, as well as defend her from a tribe of Guanlongs that want to make a meal out of her after they were drawn to the groans she made from her labor pains.

While doing his part to keep the Guanlongs at bay, Diego proves to himself that he can still be one tough predator, and Ellie soon gives birth to a daughter, whom she and Manny name Peaches. While escaping Rudy, Sid gets trapped on a floating piece of rock on a river of lava that connects with Lava Falls, but Buck, Crash, and Eddie – with the aid of a Harpactognathus – fly up Lava Falls and save him just as he goes over the falls. As they return to the rest of the Herd, they fly past the female Tyrannosaur and her children that Sid befriended, and Sid regrets not being able to say goodbye to them. Upon joining back up with the others, Buck leads them back to the cave that marks the entrance to the underground world.

After they reach the cave, they get ambushed by Rudy, who turns out to be a huge albino Baryonyx. Manny, Sid, and Diego help Buck fight him until the female Tyrannosaur emerges and attacks Rudy before pushing him over a cliff to his apparent death. Sid has a proper goodbye with the Tyrannosaur and her young, and Buck – now without a purpose in life since his archrival is gone – decides to join the Herd when Ellie extends an invitation to him. However, just as the Herd finishes crossing the bridge in the cave made from a vine-suspended dinosaur skeleton, Buck hears Rudy roar and realizes he has survived. He tells Diego, the last to cross, that he is staying in the underground world, and as he heads back, he destroys the bridge so the two worlds can remain separate for good. The bridge’s destruction also causes the cave to collapse, but the Herd gets out safely, and Diego informs the Herd about Buck’s decision.

Diego tells Manny that he is staying with the Herd, feeling like he has more adventures ahead with them, and Peaches starts to get acquainted with their wintery world.

LONG VERSION:
While Manny, Diego, Ellie, Crash, Eddie, and Buck are trying to cross what is left of the Plates of Woe (thanks to the feared Rudy having already stormed through them) to reach Lava Falls in the distance, Ellie gets hit with some strong contractions and begins to groan. Unfortunately, her groans attract the attention of a tribe of Guanlongs living in the canyon beneath the plates, and they start shaking a tree holding up the plate she is on. As Manny goes to help her, he causes the plate he is standing on to get wobbly, and after telling Ellie to get to the solid ledge, his plate and the nearby plates give way, sending him and the rest of the animals to the bottom. Meanwhile, Sid accidentally gets separated from the female Tyrannosaur and her children and soon comes face-to-face with Rudy, and he screams in terror after Rudy roars. Buck hears both cries, and after telling the others about it, he says that they have to move fast. However, Ellie yells out “peaches” to Manny moments later, which is the code word she promised to say to signify that she is going into labor, and Manny starts to panic and yells to her that they are coming. Buck decides to take Crash and Eddie on ahead with him to save Sid while ordering Manny to stay and protect Ellie until they return, and Diego decides to hang back to help Manny out. However, Manny, Diego, and Ellie are unaware that the Guanlongs are still keen on making a meal out of Ellie.

As Sid is running for his life, he finds himself at the river of lava that connects with Lava Falls, and Rudy’s footsteps end up splitting apart the ground underneath him and trap him on a floating piece of rock heading directly for the falls, after which Rudy gives up the chase. Buck, Crash, and Eddie jump onto a Harpactognathus, and after Buck puts a lasso on it, he flies it straight towards Sid. Meanwhile, Manny and Diego see Ellie in the distance, but they also spot the Guanlongs climbing towards her. Diego tells Manny to keep the dinosaurs away while he goes up to Ellie to protect her, knowing that he can reach her more quickly. As he makes his way to Ellie’s location while also chasing a Guanlong that is trying to get to her first, he starts to feel tired again, but this time he digs deep inside of himself and powers through it, and he stops the Guanlong and throws it over the edge. He then continues to fend off the Guanlongs that slip through Manny’s defenses while helping Ellie through the birthing process. As this goes on, Buck, Crash, and Eddie come under attack from a flock of Pterodactylus just as they are getting close to Sid, and both parties have a wild flight around the surrounding area that ends with Buck, Crash, and Eddie forcing the Harpactognathus to do a very steep last-second climb up Lava Falls, causing the Pterodactylus to fly into the falls and perish. The trio then catch Sid just as he goes over the falls, but as they fly back to the Herd, Sid passes by the Tyrannosaur and her babies and regrets not being able to say goodbye to them.

As Diego is helping Manny up to the ledge Ellie is on, they hear the cries of a newborn, and Manny goes over to see Ellie cradling their new daughter, whom they agree to name Peaches. Sid, Crash, Eddie, and Buck then fly in, and after the first three greet Peaches warmly, Buck takes the Herd back towards the cave that marks the entrance to the underground world. However, while Buck is saying goodbye to them, Rudy ambushes them, having been hiding in the entryway, and we see that Rudy is a huge, albino Baryonyx. He corners the Herd, but Buck gets his attention by showing him the knife that he fashioned out of the tooth he knocked out of his mouth (in the same incident that also cost Buck his right eye), and then he gets Rudy to chase after him while ordering the Herd to get to the cave. However, fearing for Buck’s safety, Manny, Sid, and Diego run after him moments later. Just after Rudy has managed to get the better of Buck by sending him up into the air intending to catch him in his mouth, Diego leaps through Rudy’s open jaws and saves Buck right at the last second. The mammals then work together to tie up Rudy in a bunch of vines and send him crashing to the ground, but as they attempt to hurry back to the cave, Sid trips over one of the vines and breaks it, freeing the beast. Thankfully, before Rudy can eat him, the female Tyrannosaur suddenly appears and uses all of her might to push Rudy over the edge of a nearby cliff to his apparent doom.

Sid then has his heartfelt goodbye with the Tyrannosaur and her young, and Manny praises Sid for being a good parent. The crestfallen Buck wonders what he is supposed to do with himself now that his archrival is dead and gone, and Ellie appears and invites him to join the Herd. He takes her up on it, and they all return to the cave and start walking along the bridge made from a suspended dinosaur’s skeleton back to their world above. Shortly after Buck plants his knife in the bridge in tribute to Rudy, he hears Rudy’s telltale roar and realizes that he has survived, so he tells Diego – the last one to cross the bridge – that he is remaining in the underground world. He takes up his knife again and swings along the vines back to his home, but he also cuts those vines as he goes, causing the skeleton bridge to drop into the fissure below it and ensuring that nothing in the underground world can ever reach the surface again and vice-versa. His actions also trigger the collapse of the entire cave, and Diego is the last to get topside, where he tells everyone about the decision Buck made.

Diego lets Manny know that he has changed his mind about leaving the Herd, feeling that he has plenty of adventures ahead with them. The Herd then watches with delight as Peaches becomes acquainted with their wintery world, and we last see Buck lassoing and riding Rudy through the jungle.

*In Scrat’s story, Scrat finds himself fighting Scratte – a female of his species who can glide like a flying squirrel – for possession of an acorn. Their fight goes down into the underground world, with obvious romantic tension going on between them, and they decide to act upon these feelings after Scrat saves Scratte’s life. They have a whirlwind romance, and the acorn is made to look like it is sad because it is not the thing that Scrat obsesses over anymore. However, Scrat eventually comes to find that living as a mate to Scratte is not idyllic, and when he suddenly notices the acorn lying a short distance away from the tree that he and Scratte have made a home out of, he happily rushes over and gets it. However, Scratte has followed him, and they reignite their fight when she tries to get rid of the acorn. Unfortunately, their battle accidentally cracks open a pressurized section of ground that lava is flowing under, causing them to get blasted skyward, and the acorn is stuck in a chunk of rock that gets launched with them. They climb up the rock and reach the acorn at the same time, but Scrat tricks Scratte into letting go, and she floats back down to the bottom while Scrat breaks through the ice to the world above. Unfortunately for him, as he gloats to Scratte that he has the acorn, the hunk of ice that blew out when he broke through falls back down and knocks the acorn out of his paws back into the underground world, in addition to plugging the hole. Scrat then screams in total exasperation. 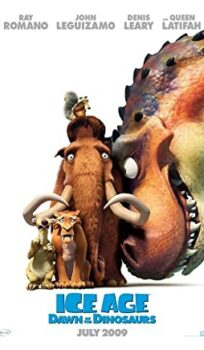