Manfred, Diego and Sid are living in a nice valley with other animals (Nobody mentions how Diego eats). Manny is being ragged how he’s the last mammoth. The ice starts melting and a vulture tells them they’re all going to drown unless they reach a ‘boat’ at the end of the valley.

So begins another ‘migration’ journey with lots of larks along the way in which they meet a female mammoth Ellie (who thinks she is a possum) and her brothers Crash and Eddie (who are possums). The ice wall melts, the valley floods, everyone survives after much adventure.

The valley drains, Manny and Ellie (in love) have a chance to go with a herd of mammoth that appear, but decide to stay with their ‘herd’ Diego & Sid.

Scrat the Squirrel enters heaven (got squished earlier) it’s a land of clouds and acorns, he sees the acorn of his dreams and is just about to touch it, when he is drawn back to the world. It turns out that Sid has saved him, Scrat then proceeds to kick Sid’s ass until the closing credits. 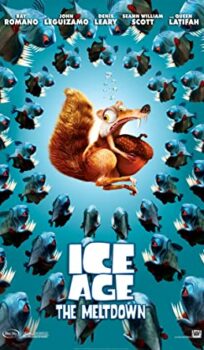