Casey (Michelle Trachtenberg) gives up Harvard when she realizes that Harvard has been her mother’s (Joan Cusack) dream and not her own.  Casey works her pretty little buns off for the next two months and competes in the figure skating sectionals.  Her coach is Tina Harwood (Kim Cattrall), the very same woman who sabatoged Casey’s chances in an earlier competition.

Casey starts off with a good, but not great, short program.  Just a few seconds into her long program, Casey botches her first jump.  Once she sees her mother, however, she really puts her heart into it and even throws in a few unscripted jumps to make up for her earlier mistake.  It was a tremendous effort, but she just misses the gold medal and has to settle for second place.  Still, an amazing comeback after such a disasterous beginning.

The movie signs off with Casey, Tina, and Casey’s mother walking out of the rink.  Both of the older women are already fighting to be the one to plan out Casey’s life.  The competition announcers think we’ll be seeing more of Casey, possibly at the 2006 Olympics. 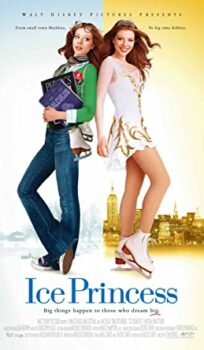