During the Cold War, a US submarine, captained by James Ferraday (Rock Hudson), is sent on a rescue mission to Drift Ice Station Zebra, a weather station at the North Pole. There have been garbled distress calls from the station and there’s a storm, so they have to go in under the ice, break through it, and walk another 3 miles to the signal source. Ferraday was forced to bring along a squad of Marines plus a secretive British agent Jones (Patrick McGoohan) and a Russian defector Vaslov (Ernest Borgnine); it turns out that a Soviet satellite crashed near the station containing state of the art film of US military bases, and the civilians’ mission is to retrieve the film before the Soviets can.

The sub suffers some damage from sabotage; the Brit and the brusque Marine captain Anders (Jim Brown) suspect each other.

They arrive at the station, which is mostly burned; some of the occupants had been shot. A Soviet agent had been assigned to the station a few days before, as had an American agent, both looking for the film. Since both were now dead, the hunt is on to find the film in the rubble before the Soviets arrive.

The Soviets paratroopers begin arriving just as the film is found in a booby-trapped canister with a detonator. Vaslov is the actual saboteur; he knocks Jones unconscious and tricks Jones into killing Anders when he comes to.

Ferraday’s crew is out-manned and out-gunned; the Russians get the film. As they send it aloft in a weather balloon to be picked up by a Soviet plane, Ferraday uses the detonator to blow up the film canister. Detente prevails, and both sides take their wounded and go their separate ways. 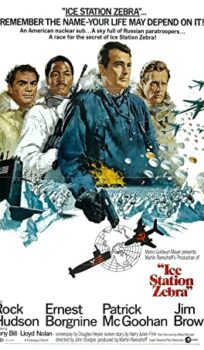