Anton (Devon Sawa) cuts his possessed hand off and fries it in a microwave, but it doesn’t die, and his undead friends Mick (Seth Green) & Pnub (Elden Henson) accidentally let it get away from him. The hand heads off to the Halloween Dance at Anton’s high school to take his love interest Molly (Jessica Alba) to Hell with it, since it needs to take a free soul there after killing a bunch of people. Anton, Mick & Pnub go after it once Anton finds out it wants Molly, with Debi (Vivica A. Fox) the Druid priestess out to slay the evil in the hand and Anton’s neighbor Randy (Jack Noseworthy) following them. At the school, the hand kills a few people outside the dance room, and though Anton tries to warn everyone about its presence, the hand soon appears in full view and causes chaos, and eventually captures Molly in another part of the school.

Anton, Mick & Pnub look for Molly and the hand, and Anton finds the hand in a hand puppet in an art classroom, but before he can slay it, Mick and Pnub searching in the ventilation ducts drop in from the ducts and accidentally allow the hand to escape from Anton again. They then hear Molly’s screams, and they find her in a nearby auto shop classroom strapped to the hood of a car being raised towards the ceiling, where a pentagram symbol is drawn. She’ll be sent to Hell when she’s squished on it. The trio eventually stop the hand still in the hand puppet from raising the car when Anton takes a hit from a customized bong Pnub made in the auto shop class and exhales the smoke up the hand puppet, getting the hand stoned and causing it to fall out of the puppet and off the lever. The car stops just as the tip of Molly’s nose touches the roof.

The hand springs up to attack Anton as he goes to get Molly down, but Debi & Randy arrive, and Debi tosses her holy dagger into the hand in mid-leap, sending it into Mick, where it disappears in a puff of smoke. Debi and Randy then go somewhere to have some ritualistic sex, and Anton gets Molly down and they start making out beneath the raised car. When Mick goes to take a hit off the bong, he accidentally hits Pnub with one of the pipes, staggering him back into the lever, which causes the car to come down on Anton. Molly avoids getting hurt due to stepping back for a moment. Then, a garage door opens, revealing a heavenly light, and Mick and Pnub ascend into heaven, asking Anton if he was coming.

It last shows Anton in the hospital, still alive but in a body cast from the waist up, with Molly feeding him. Then, Mick and Pnub show up only to Anton’s eyes, where they tell him they’ve become his guardian angels. The nurse thinks Anton has delirium due to talking to seemingly nothing, so she and Molly leave. Anton thanks Mick & Pnub for their help before they head off to the snack machine to get him something. When they turn the lights out, Anton sees “I’m under the bed” written on the roof, and thinking the hand was back, he screams. Mick and Pnub reveal that they actually wrote that so Mick could see if he did scream like a girl. 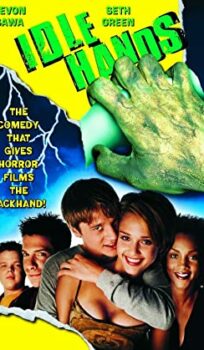