Igor, a hunchback who works as an assistant to an evil scientist, dreams of someday creating an award-winning monster of his own.

While the evil science fair is going on, Igor discovers that King Malbert used a weather-making machine to create the clouds that have plagued Malaria for years. Igor’s creation Eva defeats the other inventions and wins the contest. As she starts to turn on the crowd, Igor convinces her that she doesn’t have to be evil. Meanwhile, Brain and Scamper shut off the king’s machine and the clouds disappear.

Igor is made president of Malaria and is dating Eva, who has become the star of the local community theater. His nemeses, Dr Schadenfruede and Jaclyn, have been reduced to working as food vendors at the theater. 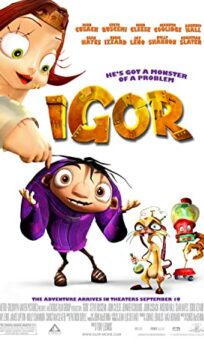