Pablo Neruda (Philippe Noiret) keeps his promise and returns to the island a few years later, along with his wife; unfortunately, Mario (Massimo Troisi) had died, and Beatrice (Maria Grazia Cuccinotta) was left alone to raise their boy, whom she named Pablito -even though she had claimed earlier that she wouldn’t use that name for the child-.

Beatrice explains Neruda that Mario’s demise occurred when, during a Comunist congregation, he approached the tribune to read a piece of poetry he had written, and dedicated to his great friend, Neruda; then, the Police arrived and attacked the demonstrators, taking some of them away and beating others to death -Mario among these last ones-; the paper with the poetry got lost in the chaos, and nobody got to know about it.  All this happened shortly before Pablito was born.

The movie ends with intertwinings of sequences of the fateful event with shots of Neruda walking down the beach and thinking of Mario. 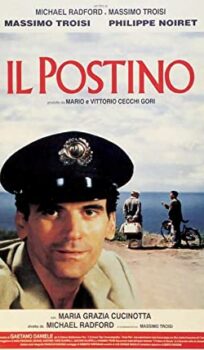