SHORT VERSION:
Despite many misadventures (but having learned a few lessons about the meaning of Christmas), Jake is able to make it back to his neighborhood in Larchmont, New York on Christmas Eve with less than 15 minutes to go before his 6:00 p.m. deadline. He steals a one-horse open sleigh from a multicultural parade so he can get to his house more quickly, but rather than ride it straight there, he first visits Allie. He apologizes for all of the times he has been a genuine jerk to her before kissing her, then he has her come into the sleigh and ride with him to his family’s house.

They arrive there with just a minute to spare, but – to Allie’s pleasant surprise – Jake decides to wait outside until the time has gone past the hour, having done away with his desire to claim the Porsche. Once it does, he heads into the house with Allie and happily greets his father and sister. His father tries to give him the car since he is only less than a minute late, but Jake refuses, saying that a deal is a deal, and he essentially tells his father he won’t be skipping any more holidays with the family. He also finally accepts his stepmother into the family.

Just then, the multicultural parade comes marching by the house, so Jake and the others step outside to check it out. A member of the parade who saw Jake steal the sleigh recognizes both that and Jake and stops the parade, and Jake owns up to having taken the sleigh, but the issue quickly becomes water under the bridge. Allie asks Jake to give her a ride back home, so they hop back into the sleigh, and Jake’s family decides to join them. They then take off with the parade following right behind them.

LONG VERSION:
Jake (Jonathan Taylor Thomas) is able to get a bus ticket to New York while he is in Nebraska, but while he is waiting at the station, he watches a live TV news report from a Bavarian village in Edelbruck, Iowa and sees Allie (Jessica Biel) there with Eddie (Adam LaVorgna), and then he watches as Eddie kisses her under the mistletoe. While riding on the bus, he comes up with a plan to make the driver do a detour to Edelbruck. He first gets a hold of a cooler from one person before putting a bunch of meat from another person’s sandwich into it, then he writes on the cooler that it contains a liver needed for a transplant operation for Allie in Edelbruck. He later brings it to everyone’s attention, and he and the other passengers manage to force the driver to make the detour.

He goes into the inn Allie and Eddie are staying at and finds their room, and he explains to Allie how Eddie and his jock friends made him miss their flight home and glued him into the Santa suit he is wearing. Just after she apologizes for thinking he ditched her, he gets into an argument with Eddie and blurts out that, because of what he did to him, he won’t be able to get home by 6:00 p.m. tonight. Suspicious, Allie demands to know why he has to be home at that particular time, so he confesses that his father (Gary Cole) had promised him ownership of his Porsche if he could make it home by then. She angrily storms out of the inn, and as he follows her, she calls him a manipulator and a liar who cares about nothing but himself. She gets on the New York bus in his place after finding out the lie he told the driver, and he asks her to give him another chance, saying that he cares about her and she must believe him. Before the bus drives off with her, Allie replies that she wouldn’t believe him even if he showed up on her doorstep in a one-horse open sleigh.

Jake gets a ride from Eddie, who feels sympathy for him over him getting dumped like that, but after Jake tells him about his plan to get home in time to claim the Porsche and then figure out how to get Allie back when college resumes in January, he forces Jake to get out of his car when they reach Ridgeway, Wisconsin, explaining that he can’t help him attain either of those things because that will make him cooler than him. After looking skyward and asking God what he wants from him, Jake spots a bunch of runners clad in full Santa Claus attire preparing for a 5K race with a $1,000 prize on the line. Though he has no money for the entrance fee, one of the other Santas, Jeff (Ian Robison), covers it for him, and Jake is able to win the race thanks to a combination of the majority of the runners being out of shape as well as a few lucky breaks, and he edges out Jeff at the finish line. However, after cashing in the check and taking a taxi to the airport so he can purchase a plane ticket home, the taxi driver tells him that Jeff is the mayor of Ridgeway and he usually wins the race every year, and when he does, he uses the money to buy turkeys for people who can’t afford them. Feeling guilty, Jake has the driver take him to Jeff’s house, and he gives Jeff the money so he can continue that charitable tradition. During the race, Eddie gets his comeuppance when he is arrested and taken to jail for antagonizing two police officers keeping a street blocked off for the event.

Jake then calls his sister Tracey (Lauren Maltby) from a payphone and says that he won’t make it back home in time and she must let their father know of this, and when she asks why, he informs her that he is stuck in the middle of nowhere without a nickel to his name, and he adds that getting his hands on the Porsche is no longer his top priority. She offers to go to a ticket agent and buy him a plane ticket home with her savings, which he accepts, but when he mentions that he has no photo identification, she says that she will also give him and the agent a secret password to go with his reservation that only they would know, which will help to confirm that he is Jake. He gets to an airport in Madison, and though his password is accepted, the agent still won’t let him board without his I.D. He then sees a dog carrier with a dog already in it that is heading for a cargo plane bound for New York, so he manages to hide in it and rides in the hold all the way there. After the plane lands, he releases the dog in order to distract the baggage handlers, enabling him to sneak into the terminal.

While doing all he can to get to his home in Larchmont on time, he comes across a multicultural parade during his last 15 minutes that is getting ready to march. He then notices an unattended one-horse open sleigh nearby and steals it, but rather than go home first, he rides it over to Allie’s house and gets her attention through her living room window. She comes out, and he sincerely apologizes for all the times he has been a genuine jerk to her before sharing a kiss with her. He then has her come into the sleigh and ride with him to his family’s house, and though they arrive with just a minute to spare, Jake tells Allie to let him know when 6:00 has passed and they will just sit and watch his family through their living room window until then. Shortly after the time goes past the hour, Jake heads into the house with Allie and happily greets his father and sister. His father tells him that the Porsche is his since he is only less than a minute late, but Jake refuses, saying that a deal is a deal. Plus, he adds that he thinks that the car isn’t ready and needs a few more Christmases to get all of the work completed, essentially saying that he won’t be skipping any more holidays with the family. He also finally accepts his new stepmother, Carolyn (Eve Gordon), into the family.

Just then, the very parade Jake stole the sleigh from comes marching by the house, so he and the others step outside to check it out. A member of the parade who saw Jake steal the sleigh recognizes both that and Jake and stops the parade, and Jake owns up to having taken the sleigh, but the issue quickly becomes water under the bridge. Allie asks Jake to give her a ride back home, so they hop back into the sleigh, and Jake’s family decides to join them. They then take off with the parade following right behind them. 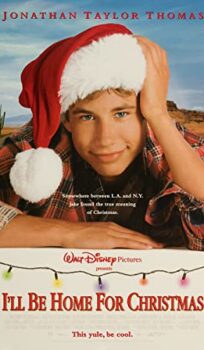