A group of beautiful women seek world domination.  They have replaced the president with a brainwashed, surgically altered man who looks just like the president, and does their bidding.  They are operating out of a fake spa in the virgin islands called Fabulous Faces.

They drug the head of the CIA, and plant him in a hotel with a hooker to get him removed.  He goes to super spy Derek Flint (James Coburn) for help.  Flint’s 3 girlfriends are kidnapped and taken to Fabulous Faces. (Yes, 3 girlfriends, he has to outdo Bond.) Flint goes there to retrieve them.  He learns that the women have a rocket taking nuclear weapons to the space station to hold all world government’s hostage.  The women have been using hair dryers to brainwash women all over the world.  While the women are explaining their plot to Flint, General Carter shows up many soldiers.  Carter was one of the brainwashed men serving them.  However, in a double cross Carter is now taking control.  Flint and the lead women are captured and place in a cryogenic freezing tank.  Flint escapes with his laser belt buckle, and frees the others.  Flint and the women now team up against Carter and his soldiers. The women seduce and disarm Carter’s soldiers.  Carter gets in the rocket to have control over the nuclear weapons, and Flint climbs in to stop him.  The rocket launches with Carter and Flint aboard.  Flint defeats Carter in hand to hand combat.  The president orders the capsule detonated to prevent Carter from blackmailing the world. They think Flint died.  However, Flint put on a spacesuit and left the space capsule before it detonated.  He uses a jetpack to get to the space station. 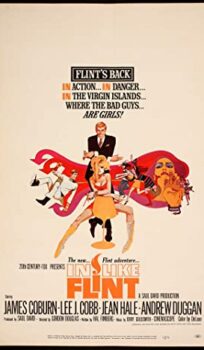