Mary Grant (Hayley Mills) and Robert Grant are a brother and sister whose father, Captain Grant, was lost at sea.  A French fisherman (Maurice Chevalier) found a note in a bottle indicating that their father is alive and a prisoner of natives.  They convince the head of the shipping company, and his son John, to search for their father.  In their search, they experience just about every disaster possible, including earthquake, avalanche, flood, fire, wild animals and a tornado.

In New Zealand, a man named Ayerton (George Sanders) claims he can take them to rescue their father.  Ayerton boards with a group of men, to fight the natives.  When they are at sea, Ayerton mutinies, stealing the ship and setting them adrift in a life boat.  Ayerton reveals that he stole Captain Grant’s ship the same way, and put Grant adrift in a life boat in the same place.  They drift ashore and are captured by the same natives.  With the help of Captain Grant’s old first mate, they escape from the natives.

Ayerton is anchored on the other side of the island, trying to sell guns to the natives there, who have Captain Grant.  The first mate leads them in re-capturing the ship and freeing Captain Grant.  Ayerton and his gang are locked up for the authorities.  As they sail for home, Mary Grant and John are falling in love. 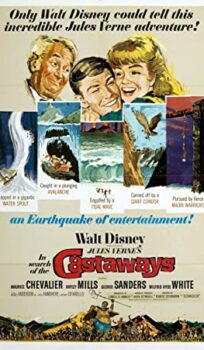