Bones (Pauly Shore), Jack (Andy Dick), Christine (Lori Petty) & Fred (David Alan Grier) are captured by the Libyans and brought to Col. Babaganoutsch (Richard Assad). He tells them that the U.S. begins their war on them tomorrow by striking their air force bases, after which they will launch chemical weapons on the U.S. bases. The quad are brought into a cell where they find a wounded Sgt. Stern (Esai Morales), who tells Bones that he was shot in the leg and captured after a recon mission went awry. He also tells Bones there was going to be a drop of supplies the next day from the U.S. forces to aid in the mission, but once they escaped the cell, he would lead Bones and the others to the rendezvous point where they would have to do the special mission for him. During the night, while Bones is trying to break through the bars, an air raid siren starts going off and bombs are dropped on the base. Christine breaks a hole in the wall of their cell, and all of them escape on a truck with Sgt. Stern.

After the truck breaks down in the daytime, the quintet buys a camel from a traveling merchant and continues on to the rendezvous point. They find dune buggies, firearms, and ammo waiting for them. They contact 1st Sergeant Williams (Art LaFleur), who informs them that they had to head back to the base and had to paint the targets with a laser packed with their equipment so the U.S. Air Force can know where the chemical warheads are at and take them out before they could be fired.

While engaging the Libyans, the Libyans begin to prepare their chemical weapons for firing. After the first air strike from the U.S. fails, Williams tells them a second one is coming in 3 minutes. Feeling that that was too long of a time, Bones prepares a bazooka to shoot the missiles with. The first one he accidentally fires backwards, but he gets a second one and fires it correctly, destroying the warheads. They soon make the Libyans retreat with the help of an incoming U.S. helicopter squad. The quad return to the base as heroes, and Bones’ camel is airlifted in.

The squad return to Glendale and open up a stereo store next to the army recruiting office. 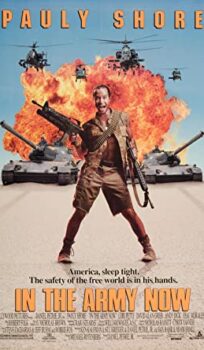