Long Ending:
In a small Mississippi town, a wealthy industrialist named Colbert is found robbed and murdered. Police officer Sam Wood (Warren Oates) arrests a black man named Virgil Tibbs (Sidney Poitier) that he finds in the local train station. Tibbs is interrogated by the white police chief named Gillespie (Rod Steiger). Much to Gillespie’s surprise, he learns that Tibbs is a well-paid and decorated homicide detective from Philadelphia who was on his way through town after visiting his mother. Tibbs’ chief offers to let Tibbs stay in town to assist in the investigation. Although Tibbs is reluctant to aid the bigoted police officers, he decides to stay.

Using modern police techniques, Tibbs determines that Colbert was murdered by blunt force trauma and moved from the murder location to another spot. Meanwhile, Gillespie and his officers arrest a suspect that was found with Colbert’s wallet and try to close the case. In front of Colbert’s wife, Tibbs demonstrates that the suspect couldn’t have been the murderer as Colbert was killed by a right-handed man (the suspect is left-handed) and the suspect had an alibi. An enraged Gillespie (humiliated by Tibbs’ saying he got the wrong man) arrests Tibbs and tries to send him home, but Colbert’s wife threatens to relocate the business her husband was building (and with it, hundreds of jobs) if Tibbs isn’t kept on the case. Tibbs stays on the case despite escalating friction with the townsfolk, including a diner worker named Ralph (Anthony James).

Gillespie takes Tibbs to interrogate a man named Endicott, who was Colbert’s business rival. Endicott runs a cotton plantation and treats his Black employees like slaves. Tibbs and Endicott get in a heated argument and both slap each other. Endicott is further enranged when Gillespie refuses to discipline Tibbs for striking him. Later, Endicott sends some goons to try and beat up (or kill) Tibbs. They are only stopped when Gillespie finds them and chases the goons off.

As the investigation continues, Tibbs becomes obsessed with bringing Endicott down until Gillespie points out that Tibbs’ bias’ are blinding him to the evidence (just as Gillespie’s bias had blinded him when Tibbs was a suspect). The two lawmen begin to bond and Tibbs is able to refocus his energy. Meanwhile, a 16-year-old girl is brought to the police by her brother. She claims that Sam statutorily raped her, got her pregnant, and killed Colbert to steal his money to elope. Although Sam is arrested, Tibbs doesn’t believe the story. He finds the local illegal abortionist and she confirms that the child’s father isn’t Sam. With that info, Tibbs can clear Sam’s name.

Before Tibbs can return to the station, he is ambushed by Ralph. It turns out that Ralph is the girl’s lover and the pair intend to frame Sam, get an abortion, and run away (killing Tibbs to cover loose ends). Before Ralph can shoot, a posse led by the pregnant girl’s brother also arrives. Although they are initially there to beat up Tibbs for “embarrassing” the sister (by listening in on her false confession), Tibbs convinces them to turn their attention to Ralph after he reveals that Ralph is actually the sister’s lover. The two sides get in a fight before the police arrive. Later at the station, Ralph admits to killing Colbert in order to rob him for the money necessary for an abortion and to flee town.

Having cracked the case, Tibbs goes to the train station to return home. A thankful Gillespie carries Tibbs’ luggage shakes his hand, and respectfully thanks him for his work. 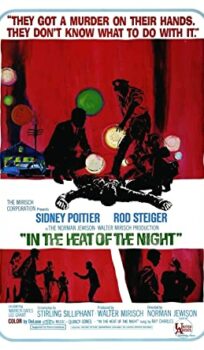