Frank Horrigan (Clint Eastwood) figures out just in time that Mitch Leary (John Malkovich) is at a dinner being held for the president and is going to attempt the assassination there. He rushes back to the hotel where it’s being held, and arrives just in time to take the bullet for the president, thereby finally being able to make amends to himself for failing to save John F Kennedy. Frank, though he isn’t hurt, due to the fact that he was wearing a bulletproof vest, is taken hostage by Mitch. Mitch plans to shoot them both, but is himself shot, and killed, by the FBI. 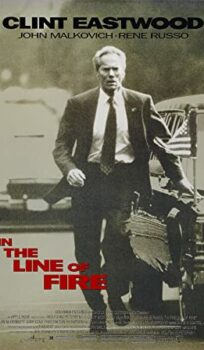