After a nuclear holocaust, seven people in a remote valley believe they are the only humans left alive on the planet.  An old retired naval captain lives there with his daughter Joanna, as he had been preparing there to survive an atomic war.

They are joined by two brothers who were camping in the valley, an alcoholic rancher from nearby, and a stripper with her lowlife boyfriend, who happened to be driving through.  They learn that they are not alone.  The extreme radiation caused some people to transform into killer mutants that crave raw flesh.  There is constant tension as the captain wants to rule like a dictator and he is the only one with guns.  The captain has decided that they must re-populate the earth and wants to assign them partners to begin reproducing.  Naturally, they oppose his tyranny.

One by one, they are dying off.  One of the brothers turns into a zombie mutant from the radiation.  The rancher tries to get back to his farm to get whiskey, and is killed by the mutants.  The lowlife boyfriend kills the stripper when they fight over his obvious interest in Joanna.

Joanna is captured by a mutant, and Steve, the surviving brother, goes to rescue her.  She has realized that the mutants fear water, and stay far from it.  Steve and Joanna stand in a small pond, safe from the mutants, but trapped there.  A sudden thunderstorm kills the mutants.  The sleaze bag boyfriend steals the captain’s gun, and reveals his plan to kill Steve and take Joanna.  However, the captain has another gun hidden.  The captain shoots and kills sleaze bag.  As Joanna and Steve walk hand in hand through the garden, the credits read “The beginning”. 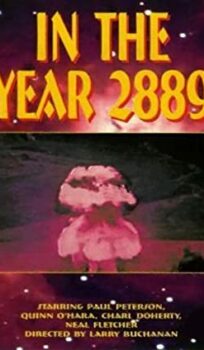