Cobb (Leonardo DiCaprio) and his team specialize in a very unique type of corporate espionage-“extraction,” or the invasion of their targets’ dreams to steal ideas and secrets from their subconscious minds. They are approached by Saito (Ken Watanabe), who wants to hire them to do something that is thought to be impossible-“inception,” or implantation of an idea into the subject’s mind. Cobb agrees to take on the challenge, but only because Saito offers him the one thing in the world he wants: to be reunited with his children.

As the caper (which involves three levels of nested dreams intended to convince Fischer (Cillian Murphy) that he has independently formulated the notion to break up his father’s business empire) proceeds, it is revealed that Cobb has  done inception before, and that the idea he inadvertently implanted in his wife Mal’s (Marion Cotillard’s) subconscious led to her eventual suicide.

The mission appears to be successful in all respects, but as Cobb returns to his home and embraces his children, the final shot of the film shows Mal’s metal top spinning on and on, hinting that Cobb, after all, may not have successfully returned to “reality.”

But…Max adds” “Before the film cuts to black, the metal top begins to wobble, which it has never done during the time in which a character is in a dream (it has always been a perfect spin). This indicates that the metal top will soon fall, confirming that Cobb was successful in his mission, and is in reality, reunited with his family.” 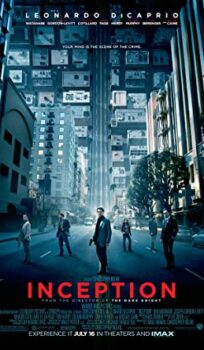