No Time to Die

The case officially ends in 1990, with no convictions, all charges dropped, millions of dollars squandered and the entire McMartin family left financially ruined and publicly destroyed.

In the end, they are all seen taking a walk together by the Venice Beach pier and Virginia McMartin (Sada Thompson), despite the harrowing ordeal they all went through, does not look embittered, expresses how much children still mean to her and blames people’s obsession with watching TV.

Longer version:
The entire case against the McMartins reaches a point in which it becomes evident that the Prosecution, led by Ira Reiner (Richard Bradford) and Lael Rubin (Mercedes Ruehl), simply refuses to concede that they have mismanaged the procedures all along, by only examining some evidence on a strictly superficial level while deliberately ignoring or concealing other pieces, and not assessing the credibility of the accounts from the children as visibly coerced from them by Kee McFarlane (Lolita Davidovich), thus not wanting to look incompetent to the public eye. All the while, the entire affair has become an out-of-control mediatic circus, partly because McFarlane was, at that time, the lover of renowned news anchor Wayne Satz (Mark Blum), thus giving him the upper hand in getting outrageous ratings out of the stories surrounding the ongoing trial.

Going at great lengths to achieve it, Danny Davis (James Woods), the Defense lawyer of the McMartins -who originally took the case as an opportunity to draw great publicity towards himself, but had a major epiphany over the course of it and came to truly care about his clients-, manages to discredit: the so-called expertise of McFarlane, who, in reality, it is revealed wasn’t even a psychiatrist; many of the conflicting testimonies of the very impressionable children who took the stand; a certain George Freeman (Dennis Burkley), who had been brought up as a key witness for the Prosecution but happened to have a pending accusation of murder against himself; and the obsession of the Prosecution to show Ray Buckey (Henry Thomas) -who eventually takes the stand, after a staggering five years in prison without bail or the chance to testify- in court as a malicious, drug-addicted pedophile, otherwise incapable of having sex with an adult, to the point of bringing a former lover of his, Diana Sullivan (Valerie Wildman), to the stand, only for her to assert that they did use to be sexual partners.

In January 1990, after seven years and about $15 million dollars in legal expenses (both from taxpayers and the McMartins themselves), the case ended with no convictions, a hung jury on 13 of the original counts and the whole family acquitted. Moreover, despite the goading of some overzealous people and members of the media, an attempt at a retrial falls apart. Peggy (Shirley Knight) bittersweetly declares that she and her family lost everything because of the ordeal of the case.

Towards the end of the movie, the McMartins, along with Davis, are seen strolling around the Venice Beach pier, commenting about the aftermath. A couple is seen accosting them, showing that people were still too enticed about the media gossip surrounding the case. Peggy wonders why God didn’t stop all that carnage from happening, to which Virginia answers: “Don’t blame God. This was all the people’s doing. They didn’t have the time to stop and listen to God BECAUSE THEY WERE TOO BUSY WATCHING TV”.

Title cards inform that (up to the film’s release, in 1995) the McMartins still lived in Southern California; Peggy had a nervous breakdown and became agoraphobic; Peggy Ann (Alison Elliott), Ray’s sister, filed a lawsuit to successfully regain her teaching credentials and had a family of her own; Lael Rubin was defeated in attempting to become a Superior Court judge; Wayne Satz died of a heart attack in 1992; Kee McFarlane still worked for Children’s Institute International; Davis still practiced law in Los Angeles; and Ray Buckey intended to become a lawyer himself.

It is to be noted that the whole case started under what has now been agreed on as barely-substantiated rambling from an alcoholic, mentally ill woman whose toddler child was being sexually abused by the boy’s own father; yet, due to the extremely poor handling of the process from the beginning (both by the authorities and the prosecution), it led to the fiasco we all came to know. 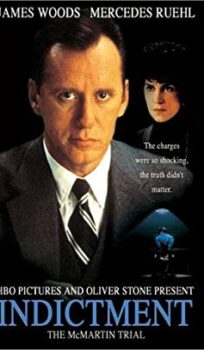